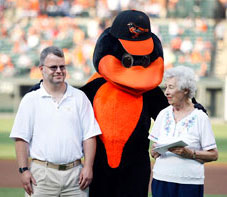 Member of the year James Bocklage, from Our Lady of Fatima, Baltimore, and Outstanding Junior Holy Name member Donche Golder, 11, from Transfiguration Catholic Community, Baltimore, were recognized for their outstanding work in their parish and community before the Orioles-Angels game.

More than 300 Holy Name Society representatives were in attendance.

The presentations were made by involved Father Michael W. Carrion, BAHNU’s spiritual director, and pastor of Immaculate Heart of Mary, Baynesville.

The following seminarians each received a $500 stipend: Ned Conklin, Julian Garcia, Christopher Little, Gabriel Martinez, Hamilton Okeke, Steven Roth, and Carlo Stebbings. Daniel Taylor was unable to attend. The Holy Name Union congratulated these men, cited by Father Gerard Francik, the archdiocese’s director of vocations, as they continue their path to the priesthood.

Also on the field during the pre-game ceremony were William Harris Jr., president of BAHNU and a parishioner of Our Lady of the Fields, Millersville; Dennis Smedberg, of Holy Rosary, Fells Point, and the co-chairman of the Holy Name baseball ticket committee; and Fran Weber, whose husband, the late Bill Weber, began the Holy Name Union custom of raising funds for seminarians 30 years ago.

The stipends are for personal use by the seminarians. Father Francik said that one of the first commodities on which they figure to spend this year’s stipends will be gasoline.

In addition to their mission to revere and pay homage to God and Jesus’ holy name, the other annual accomplishments for the Holy Name Union’s approximate 800 members include presenting scholarships to 8-10 parochial high school students; donating $1,000 to Archbishop Edwin F. O’Brien for his annual discernment supper for those considering the priesthood, and assisting pastors with activities to promote God’s holy name.

Archbishop O’Brien met with the group in May, when Mr. Harris said that he encouraged their efforts.

The Holy Name Society acts at the parish level, with approximately 30 chapters in the archdiocese. The Union met July 23 with Bishop Mitchell T. Rozanski to plot a strategy to add new chapters.

In 2011, BAHNU will celebrate its 100th anniversary in the Archdiocese of Baltimore.

“We’ll be hosting a national convention in September 2011,” Mr. Harris said, “and asking for the archbishop’s blessing and possible participation.”