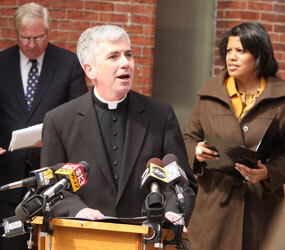 Father Patrick M. Carrion, pastor of the community, said the steeple is being leased to AT&T on a “multi-term” deal. The company was looking to expand its wireless speed and reach in Baltimore City, and a representative approached Father Carrion a year ago, exploring potential towers on which to place an antenna. St. Mary, Star of the Sea, another a parish in the Catholic Community of South Baltimore, was also considered.

For AT&T to proceed with the work, Father Carrion said that stipulations included “the integrity of the steeple would not be compromised from an exterior view and minimal impact on the infrastructure.” He added that all were “achieved well by AT&T.”

“Now that the steeple has an even better exterior presentation, I can move forward with the long-desired goal of illuminating the steeple,” Father Carrion added. “There is little to nothing illuminated on the south side of the (inner) harbor and one can see the steeple from across the harbor, from Route 95 and Route 395.

“Having the steeple lit and seen from such great distance is a great statement that the Catholic Community of South Baltimore is alive and well here in Locust Point and Federal Hill.”

Work on the tower began in November 2010. Jennifer Clark, a spokesperson for AT&T, said the company is close to turning on the tower, adding it wanted to “preserve the integrity and the aesthetics of the building while installing it into a steeple.”

“AT&T has been very respectful to the church,” Father Carrion added. “If we had a funeral during the day or any other service … they made sure their contractors were aware and they worked around our schedule.”

AT&T invested more than $325 million in its “Baltimore metro wireless and wireline network” from 2008 through 2010.