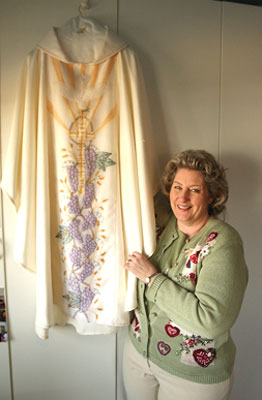 Catholics sitting in the pews may have a hard time discerning the meticulous hand-stitched design Kathy Furth embroidered into their priest’s vestments. The human eye might glaze over the delicate intricacies and fail to appreciate such fine craftsmanship.

Through her business Sew Many Seams, Mrs. Furth weaves together her faith and talent as she handcrafts one-of-a-kind ecclesiastic vestments, christening and bereavement gowns, prom and wedding gowns, and other garments.

“Her needlework is exquisite and focuses on many techniques no longer practiced,” wrote Helenrose Tucker, formerly a teacher at Monsignor Slade Catholic School in Glen Burnie, in a letter to The Catholic Review. “Kathy is blessed with a gift for needlework. But what makes Kathy truly amazing is her work with ecclesiastic garments.”

One of Mrs. Furth’s favorite chasubles is one she handcrafted for a priest friend to officiate the wedding Mass of her son. The one-of-a-kind garment has traveled to Rome on the back of Trinitarian Father Albert M. Anuszewski, who promised he would use it often as he spends the next six years in Italy.

The embroidery alone took 285 hours to complete on the silk organza and shantung silk piece, called “Fruits of My Labor.” Its front is colorfully decorated with purple grape vines, grapes and leaves, a chalice, a cross, a shell, a dove, wheat and golden rays. The latter symbolizes God, and the cross symbolizes his son; the Holy Spirit is portrayed by the dove carrying an olive branch – all designed liturgically correct, said the parishioner of Church of the Holy Apostles in Gambrills, who has been sewing since age 10.

“My grandmother taught me how to embroider,” said the nearly 50-year-old, who has a sewing machine, an embroidery machine and a serger, which finishes seams, on her work table.

“I recognized how very special her heart and hands are,” said Ms. Tucker. “She honors tradition.”

The seamstress was commissioned to make an altar cloth for a Thanksgiving Mass at The Seton Keough High School, Baltimore.

She also made a dalmatic, which is similar to a priest’s chasuble, for Deacon B. Curtis Turner, principal of St. Frances Academy in Baltimore. She embroidered it with the words “oremus pro invicem” (translated “let us pray for each other”) in a line down the front.

“I thoroughly enjoy – and prefer – doing the handiwork,” said Mrs. Furth, a graduate of Towson Catholic High School, as she bustled about her at-home studio readying 10 pieces of handiwork for the 46th annual Needlework Exhibition in Mount Vernon, Va. She planned to take Father Anuszewski’s vestment, which she “borrowed” back, a bridal gown, a lace jacket, a first Communion dress and veil, and her grandson’s christening suit, among other items.

Mrs. Furth has walked away from competitions with design awards in hand, most recently in the Smocking Arts Guild of America (SAGA) design show last October.

Embroidered into her work days is the making of bereavement gowns for babies.

While her hands and fingers lovingly craft such “sad” pieces, Mrs. Furth said she can’t help but think how lucky she is to have five healthy kids and a grandchild.

The tiny gowns are donated to hospitals to clothe babies who die at birth or shortly thereafter. As part of her SAGA membership, she is committed to making six of these annually for a Wee Care service project.

“Come to the Table of Plenty” is this Catholic’s favorite hymn. Through the traditional craft of sewing and embroidery, so closely associated with her faith, the self-proclaimed “old-fashioned girl” feels she is able to give back from her plentiful table.