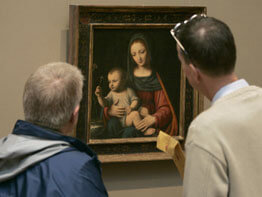 WASHINGTON – During the Christmas season, when Christmas displays and the public outcry against them get almost equal billing, the tiny postage stamp dares to push the envelope, so to speak.

While some towns are battling over the use of red and green lights on city buildings, Nativity scenes in parks and what to call holiday evergreen trees, the tiny adhesive squares on billions of letters and packages this December will subtly remind postal workers and mail recipients about Christmas and other religious holidays.

This year the Postal Service has issued more than 2.6 billion holiday stamps. The majority of them are called “holiday knits” featuring Christmas images that look like hand-knit evergreens, snowmen, deer and teddy bears.

The rest of the seasonal stamps feature the Madonna and Child and commemorate Kwanzaa, Hanukkah and Muslim festivals.

According to a 2007 press release by the Postal Service, the Madonna and Child stamp has been a U.S. tradition since 1978.

What it doesn’t describe is the road it took to get there.

The series actually got its start in 1966, four years after the first Christmas stamp debuted with a wreath, two candles and the words “Christmas 1962.”

The first religious Christmas stamp owes its origin in part to the lobbying efforts of the late Anthony Coviello, a parishioner at Our Lady of Mount Carmel Church in Waterbury, Conn.

The 1966 stamp, “Madonna and Child With Angels,” started a trend of Christmas stamps featuring Renaissance paintings. The series was interrupted in 1977 when the Christmas stamp featured a praying George Washington.

The next year the Postal Service resumed the Madonna and Child stamps and the series has continued ever since, with a close call to stop production in 1995.

When a Postal Service advisory committee voted to replace the Madonna and Child stamp with a Victorian-era angel, a flurry of negative reaction from public interest groups and even then-President Bill Clinton, prompted an immediate reversal.

Marvin Runyon, postmaster general at the time, said the Madonna and Child stamp would stay, at least while he was in office, because it had “occupied an important place” for so many years and was “meaningful to so many Americans.”

And in 2007, the Madonna and Child stamp is still sticking to its spot in the right corner of millions of pieces of mail. This year’s “Madonna of the Carnation” is a detail of a Bernardino Luini painting of the same name from around 1515 and housed in Washington’s National Gallery of Art.

Frances Frazier, community relations specialist for the U.S. Postal Service, told Catholic News Service Nov. 28 that every year about this time the Postal Service gets complaints about its stamps, including objections that they are called “Christmas stamps” – even though they’re listed as “holiday stamps” on the Web site.

Frazier said the Postal Service tries to please everyone by offering stamps for other religious and ethnic celebrations. The Hanukkah stamp marking the eight-day Jewish festival of lights debuted in 1996. The Kwanzaa stamp for the African-American holiday first appeared in 1997 and the Eid stamp commemorating the Muslim festivals of Eid al-Fitr and Eid al-Adha was introduced in 2001.

And while some complain that religious stamps are even made available, Frazier said plenty of others complain that there are not enough of them.

The Postal Service has already identified several works of art that it plans to use for future Madonna and Child stamps and it doesn’t expect to run out of images any time soon. The hard part, said Frazier, is finding different styles and varieties.

Across the ocean, the Royal Mail, the United Kingdom’s postal service, alternates between religious and secular Christmas stamps each year. This year it is selling angels and Madonna and Child stamps.
Last year’s Santa, snowmen, Christmas tree and reindeer stamps were criticized by religious groups for their lack of a Christian message.

But the stamp alone is not the ultimate Christmas message. A 2006 survey conducted by the British newspaper the Daily Mail revealed that only one in 100 Christmas cards sold in Britain contained a religious image or message as Nativity scenes have been replaced with winter landscapes or cute designs.

Despite their message or lack of one, the 2 billion holiday cards expected to be mailed in the United States this year still remain a holdout to electronic alternatives.

The number of electronic cards, or e-cards, is just a fraction of the 6 billion paper cards sent throughout the year in the United States, including Christmas, which generates the most cards, according to the Greeting Card Association.

And the Postal Service is happy to add that e-cards are hardly taking over since it reports that one e-card is currently sent for every 20 paper cards mailed each year.

So it looks like the stamp, whatever its design, also comes with the message that it’s here to stay.