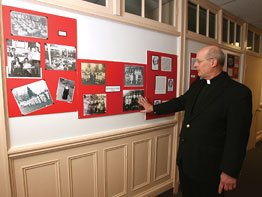 Anyone wishing to discover 140 years of history of the parish and school of Shrine of the Sacred Heart, Mt. Washington, need only slip downstairs to the church undercroft.

To commemorate the parish’s 140th anniversary, Timonium residents Tom and Marianne Brennan led a group of other parishioners to create the History Wall.

It chronicles the Shrine of the Sacred Heart’s beginning through 2007, with a collection of photos, architectural renderings and documents from church and Archdiocese of Baltimore archives.

Titled “140 Years of Grace – 1867-2007,” the undercroft hallway History Wall begins with a photo of the original Shrine of the Sacred Heart chapel – built in 1855 as St. John’s German Reformist Church, which was across the street from the present-day church and school.

The deed to the chapel and octagon-shaped school was transferred to the Sisters of Mercy after the American Civil War, said Monsignor Richard E. Cramblitt, who has served as pastor of Shrine of the Sacred Heart for the past 12 years.

The Sisters of Mercy established Mount Saint Agnes Academy and gave the chapel to Archbishop Martin John Spalding in 1867 to create Shrine of the Sacred Heart, he said.

The Brennans and their group labored on the History Wall for about six months before mounting the display on the undercroft hallway walls in October, and it will remain up until June, when the 140th anniversary year comes to a close, Monsignor Cramblitt said.

“They did a wonderful job,” he said. “It really is a treasure.”

Highlights on the History Wall include photos of every pastor of the parish – with the exception of Father James Connelly, who served from 1892-1908, current parishioner Thelma Brooks Blair’s 1929 certificate of promotion from the Shrine of the Sacred Heart School to high school and a newspaper clipping of the 1917 opening of the current church.

“The architect for the current church was a parishioner named E. Francis Baldwin,” Monsignor Cramblitt said. “He was a renowned Baltimore architect who designed the Baltimore Round House for the B&O Railroad. He didn’t live to see the church project completed.”

From 1917 until the current school building was constructed in 1958, the entire parish school was housed in the church undercroft and photos of the students in those rooms are on display.

Kindergarten classes continued in the undercroft until the school building was expanded in 2003 and that space now is used for social gatherings, religious education, choir practice, faith discussion and prayer groups, Monsignor Cramblitt said.

“I really love going down and looking at it,” said Ruth Boecker of Lutherville, a parishioner whose children attended the school. “I especially love the photos of our sister parish in Belize.”

Though parishioner Claire Shepard of Lutherville believes the Brennans and their group did a stellar job with the research and displays, she would have preferred more details included in the project.

“A lot has happened in 140 years,” Ms. Shepard said with a chuckle. “I guess they ran out of wall space.”

Monsignor Cramblitt just hopes the wall receives a large audience while it’s on display so parishioners and the curious gain an understanding of the parish’s metamorphosis over the years.

“The parish has undergone a lot of shifts in its day and the wall gives you a glimpse into the changes,” he said. “It’s a great presentation that puts us in touch with the generations that preceded us in faith and inspired us to continue in faith. We are part of a living tradition.”