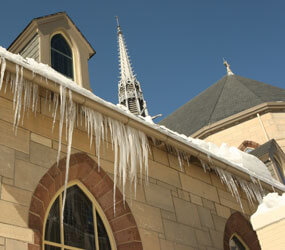 When Monsignor Robert Hartnett greeted parishioners of Our Lady of Mount Carmel for Saturday afternoon Mass Feb. 13, he opened with a bit of humor.

“Let’s see if we can remember how to do this,” the Essex pastor joked after the opening prayer.

After being hit with a series of record-setting blizzards and snow storms, last weekend was the first chance many Catholics could return to Mass throughout the Archdiocese of Baltimore. For the safety of parishioners and church staffs, many parishes had canceled or reduced their Mass schedule during the snowstorms.

While Masses seemed to resume normally at most parishes, some city parishes suffered continued low attendance because of a lack of available parking. The blizzards also wiped out several major events.

The commitment weekend for the Archbishop’s Annual Appeal, which had been scheduled for Feb. 13-14 was postponed to Feb. 20-21, with a follow-up weekend now planned for Feb. 27-28.

For only the second time in the event’s 26 years, the Maryland Catholic Conference canceled Lobby Night, which was scheduled for Feb. 15 in Annapolis and was expected to have attracted more than 500 people to meet with their lawmakers.

The MCC made the decision due to ongoing concerns about driving and pedestrian conditions in and around the state capital. Information on alternative ways to reach legislators is available at www.mdcathcon.org.

Two events connected to Black History Month, the Feb. 12 Mother Mary Lange awards banquet at Martin’s West and the Feb. 13 Mass honoring the 25th anniversary of the Harambee organization at the Basilica of the National Shrine of the Assumption of the Blessed Virgin Mary in Baltimore, were not held.

Organizers for the Mount 2000 retreat for young people were also forced to cancel. Annually held at Mount St. Mary’s Seminary and University, the event was expected to draw hundreds of young people to the Emmitsburg campus.

The event has a “no refund” policy, but a statement on the organizers’ Web site said a partial refund of $15-17 will be made available. The organizers encouraged participants to designate their refund for Haitian relief through Baltimore-based Catholic Relief Services.

“This option is in keeping with the true spirit of Mount 2000,” the statement said, “one of generous service to our brothers and sisters.”

Monsignor J. Bruce Jarboe was to be installed rector of the Cathedral of Mary Our Queen in Homeland Feb. 13. His installation has been moved to March 21, at the 11 a.m. Mass.

As of Feb. 15, parishioners of Prince of Peace in Edgewood were waiting to hear when they could return to their parish hall. Father John B. Ward, pastor of the Harford County parish, said the steel in the structure bowed as snow accumulated. The county government deemed the parish hall unsafe and a danger sign was placed on its doors.

“Right now we are waiting to hear from the county,” Father Ward said.

Father Ward said the roof was designed to bow and would return to its normal dimensions. A structural engineer deemed the parish center safe and the county needed to certify that as well.

“We’ve had very good communication,” Father Ward said of the county. “I called them about it. They couldn’t have been nicer.”

The pastor said he first noticed the roof bowing Feb. 13 and that repair work would be minimal. Weekend Masses were celebrated as normal in the church, which was not impacted by the snow. Religious education classes for Church of the Holy Spirit, Joppa, held at Prince of Peace were canceled Feb. 14. Holy Spirit’s parish center was destroyed in a fire late last year.

Prince of Peace religious education classes scheduled for Feb. 15 were canceled as well.

No weddings were postponed at the Basilica of the National Shrine of the Assumption of the Blessed Virgin Mary in Baltimore, one of the most popular sites for Catholic marriage ceremonies. Father Jeffrey Dauses, rector, noted that the parish does not schedule February weddings precisely because of the danger of getting snowed out.