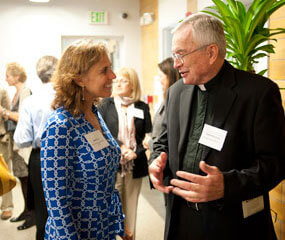 Since June 2009, 15 elementary schools and two high schools in the Archdiocese of Baltimore have been shuttered. All but one, St. Michael School in Frostburg, was in Baltimore City or Baltimore County.

For generations, faith was fostered, leaders were cultivated and memories were created in those schools. Some of those buildings were a sign of hope in troubled neighborhoods.

What happens to those underutilized buildings?

Closed schools, convents and rectories have found a second life in recent years, becoming catalysts for change in some neighborhoods.

The parish school at St. Ann, on Greenmount Avenue in the city, had been quiet from the 1970s until September 2009, when Mother Seton Academy opened a spectacular new school there.

Not far away, the former St. Bernard/Holy Spirit building has been converted into low-rent apartments for the residents of Marian House, women recovering from addiction and homelessness.

Further north and west, in Hamilton, the school building at St. Dominic Parish is the site of a celebrated reuse, as a century-old shell is now home to John Manley House, low-income housing for seniors.

Most recently, the archdiocese agreed to lease the former Shrine of the Sacred Heart School for 10 years to the city, which will use the facility to alleviate overcrowded Mount Washington Elementary.

Many other former parish schools, such as Corpus Christi, have become sites of charter schools.

Johns W. Hopkins, executive director of Baltimore Heritage, an organization that works to preserve historic buildings in the city, points to trendy neighborhoods such as Canton, Federal Hill and Fells Point as the perfect examples of the fruits of those efforts.

He is keenly interested in what happens to buildings of faith.

“The issue of what to do with church buildings is front and center in many cities,” Hopkins said. “It’s not just Baltimore. We think preserving and reusing buildings is absolutely key to Baltimore’s growth.”

The archdiocese continues to take steps to find new uses for underutilized buildings as Nolan McCoy, director of facilities management for the archdiocese, works to find long-term occupants.

McCoy said that the former school building at Holy Family in Randallstown is close to being leased, and that a Head Start program is now housed at St. Joseph Passionist Monastery, which used to be the home of St. Bernardine School.

Our Lady of Fatima’s school building is being leased by St. Vincent de Paul of Baltimore.

Like Shrine of the Sacred Heart, those three schools were part of the archdiocese’s consolidation plan, which closed 13 schools in spring 2010.

The archdiocese is working with The Cathedral Foundation, parent company of The Catholic Review, to create marketing materials that provide details of underutilized buildings.

“We don’t want the buildings to remain idle and become blights,” said McCoy, who noted that new tenants must agree that all future purposes of the building won’t be contrary to Catholic teachings.

“We don’t want to rush in and lease to just anybody,” McCoy said. “First and foremost, it must be compatible with the ongoing use of the parish.”

Graduate-level students at the Maryland Institute College of Art will be reminded of the past at their new campus building in East Baltimore.

The $1.3 million MICA PLACE (Programs Linking Art, Culture and Education) occupies the former St. Wenceslaus School, which closed decades ago and has been used for low-rent apartments. The first two floors house classrooms and exhibition spaces; apartments for students are on the upper two floors.

St. Wenceslaus’ name remains etched over an entrance to the building, east of MICA’s main campus in the Mount Vernon arts district. The expansion, which will see students taking residence this month, is a bold step for both parties.

“I think they (MICA) want to be connected to the historic roots of the community,” said Third Order Regular Franciscan Father Peter Lyons. “The students have chosen this program because they want to use the arts as a tool for community development and a tool of social justice. They will be very involved in the community.”

Father Lyons said that the surrounding neighborhood has struggled over the years, but that he and parishioners have never lost faith. He’s happy to see others believing in the neighborhood and breathing new life into an old building.

“We’re very excited about them coming,” he said. “We hope for a close relationship. We feel what they bring to this community is something very positive.”

When Archbishop Edwin F. O’Brien dedicated four-year-old Cristo Rey Jesuit High School’s new $7 million academic center in September, it was another example of finding a new use for an underutilized building. It is housed at a former convent on the campus of Holy Rosary Parish in Fells Point, space that had been home to some Cristo Rey offices since its 2007 opening.

Cristo Rey’s classes are in Holy Rosary’s former elementary school, which had also been the site of the since-closed Our Lady of the Rosary High School.

Jesuit Father John W. Swope, president of the school, said that when the Cristo Rey network analyzed the Baltimore area, the organization decided not to build a new school.

“If we were to build some Taj Mahal,” Father Swope said, “some naysayers might say, ‘Of course, look at the facilities.’ We have facilities that are adequate, very well maintained and that can accommodate our programs.”

Cristo Rey pays rent to the parish and Father Swope said the school is always open to helping out at Holy Rosary events. He believes that a reused building should respect the intent of its original financial backers and its surrounding community.

“It’s strategic planning at its best,” Father Swope said, “when a school emerges from another school.”

Interest in underutilized buildings can be directed to David Owens at 410-825-8440.