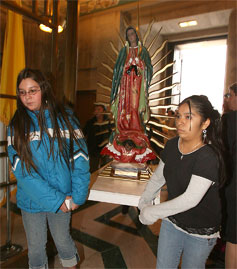 As 14-year-old St. John the Evangelist, Frederick, parishioner Mary Rios climbed the front entrance steps to the Cathedral of Mary Our Queen, Homeland, Dec. 9, the sounds of a mariachi band greeted her as she prepared to experience her first celebration of the feast day of Our Lady of Guadalupe.

Though her parents are from El Salvador, Mary was born in Maryland and had only heard stories about the big festivals this time of year in Latin American countries. The Frederick resident was thrilled her family decided to travel to Baltimore to participate in the archdiocesan-wide Mass and reception, which attracted more than 1,000 participants.

The celebration is a reminder to Hispanic Catholics of the apparition of the Blessed Virgin Mary to St. Juan Diego in 1531 on Tepeyac Hill, near present-day Mexico City.
It came at a time when Spanish evangelization efforts were not going well among the people in Central America, and this served as a uniting force for them to embrace Catholicism, said Maria Johnson, director of the Office of Hispanic Ministry for the archdiocese.

It was Archbishop Edwin F. O’Brien’s first time serving as the celebrant of Baltimore’s annual Our Lady of Guadalupe celebration. He delivered his homily in Spanish and received a boisterous standing ovation at the close of the Mass.

“Finally, among the many more wonders that surround this beautiful feast,” Archbishop O’Brien said in his homily, “the fact that eight million souls sought baptism in Central America in the 10 years after this apparition and countless millions make pilgrimage to Mexico City every year to pray before the image of the virgin now framed above the altar of a second, new and larger basilica.”

With an image of the Blessed Virgin Mary sewn on the back of his traditional Mexican dancers’ attire, 9-year-old St. Clement I, Lansdowne, parishioner Christian Ramos listened intently as the new archbishop told members of the congregation of “the joy and the privilege that should be ours in having Our Lady of Guadalupe as patroness of the United States and of all the Americas.”

The message pleased the young boy, who took great joy in joining other youths with Mexican heritage in dancing during the festivities.

Archbishop O’Brien took the opportunity to encourage vocations within the Spanish-speaking community.

“I cannot complete this Mass without begging you, our deeply faithful Spanish-speaking Catholics, to pray every day and in every liturgy for vocations to religious life and priesthood,” he said. “We are blessed with growing numbers of your families here in Baltimore. You must make it your fervent prayer that vocations to our Church will flower from within your midst. The Virgin of Guadalupe will make this happen if we address this special prayer to her every day.”