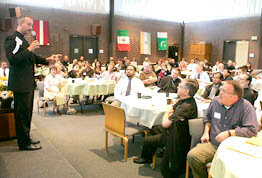 Some 150 clerics and lay people from several dioceses in the Mid-Atlantic states traveled to the Wilde Lake Interfaith Center in Columbia Oct. 10 to learn how better to serve their growing Latino congregations and to effectively unite the English and Spanish-speaking communities.

Sponsored by the archdioceses of Baltimore and Washington, D.C., the day-long Hispanic Ministry Conference on Evangelization and Popular Religiosity is part of an ongoing effort to understand Latino culture.

For instance, Hispanics tend to attend Mass in greater numbers on Ash Wednesday than on Christmas, they partake in a ritual on the Epiphany where a baby Jesus figurine is hidden in a ring cake, and they use a piñata, which serves as a symbolic tool, during Advent celebrations, said Father Shay Auerbach, S.J., pastor of Sacred Heart in Richmond, Va., and keynote speaker at the conference.

“Many of their customs actually derive from Aztec rituals that missionaries during the colonization incorporated into the Catholic traditions in Latin America during the first evangelization,” said Father Auerbach, who was formerly assigned to St. Gabriel, Woodlawn, and St. Joseph, Cockeysville.
He suggested pastors should organize Hispanics in their congregations for feast days and other special events and give them leadership roles so they, in turn, will feel a connection to the parish and bring other Latinos into the churches.

“You hear a lot of people complain that Latinos don’t give financially to their local churches, but if you ask, you will find that many of them send money to the church in their hometown in their native country,” Father Auerbach said. “They can be very generous if they are made to feel at home in their parish here.”

Taking the time to understand Latino culture and church customs will help them trust the local clergy and feel connected to the Anglo congregation, said Maria T.P. Johnson, director of the Office of Hispanic Ministry for the Archdiocese of Baltimore.

A weekly Spanish Mass was established at St. Michael the Archangel, Overlea, nearly a year ago, and the Hispanic congregation has been steadily immersing itself in parish events like the annual picnic; the Hispanic culture will be prominently featured in the upcoming Christmas Bazaar, said Father James D. Proffitt, pastor of the church.

“We’ve made a concerted effort not to have a separate parish,” Father Proffitt said.

He said that while the Spanish Mass offers Hispanics a way to worship in their native language, Spanish-speaking members of the parish are also getting involved in the parish council and on committees.
Many of the Latinos have unique pastoral needs to which the clergy at St. Michael the Archangel have had to adjust, he said.

“In the United States, we have an order for children receiving their sacraments the Latinos don’t necessarily follow,” Father Proffitt said. “We’ve also needed to have some marriages validated. We try to accommodate people as they come to us.”

“We can delve deep into the culture and understand their beautiful devotional ways,” Bishop Rozanski said. “We also want to unite the Anglos and Hispanics in prayer. This (conference) will help us to do that.”