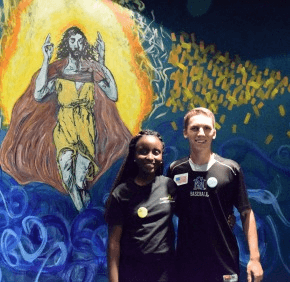 By Maureen Cromer
mcromer@CatholicReview.org
SPARKS – There is a sign over the chapel doors at the Monsignor O’Dwyer Retreat House. It reads: “Let your heart guide you, it whispers, so listen carefully.”
Those words rang true for attendees of High-LI 2016.
High-LI, the High School Leadership Institute, is an annual weeklong summer leadership development program hosted by the Archdiocese of Baltimore. Catholic youths entering grades 10 to 12 in the next school year have the opportunity to live and pray in community while learning how to be more competent and effective leaders in their parishes and school.
“One of the things I love most about High-Li is that as the week goes on, the young people begin to truly emerge as leaders and run the camp themselves,” said Craig Gould, Director of Youth and Young Adult Ministry for the archdiocese. “As their leadership skills being to show, the staff leaders back away.”
This year, two of the attendees’ strong leadership skills were noticed early on – Jazmine Wangui and James Cardillo.
Wangui is a parishioner of St. Charles Borromeo in Pikesville and a student at Lansdowne High School.
“My favorite part of this experience is making new friends and forming those relationships,” Wangui said. “I also really enjoyed writing my witness. As stressful as it was, I’m glad I went through with it.”
Wangui, who was recently elected as her school’s student body president, is excited to take the leadership and planning skills she learned at High-LI back to Lansdowne High School.
“Jazmine has a sense of initiative that doesn’t always come out, especially early on,” said Rena Black, co-director of High-LI. “But I have really seen her take the first step in a lot of ways and really anticipating the needs of the camp.”
Cardillo, a student and parishioner of St. Mary’s in Annapolis, was also a standout leader throughout the weeklong camp.
“I had actually never heard of High-LI before this year,” Cardillo said. “So when my campus minister recommended I apply, I was a little unaware of what I was getting into. The more we talked about the experience, though, the more I wanted to sign up. Luckily, everything worked out.”
Cardillo hopes to encourage some of his younger friends to attend High-LI in the future. He also hopes to take his new leadership and motivation abilities to the St. Mary’s High School soccer team, where he will serve as captain of the varsity team this year.
“James completely nailed his witness talk,” said Kate Kleintank, Cardillo’s group leader and Director of Youth and Young Adult Ministry at Church of the Resurrection. “He had so much emotion and you could really see him develop as he went on. He is constantly bringing others in and is more concerned with those around him than he is with himself.”

Eagle of the Cross honorees strive to live toward on high

Catholic High senior, one of 60 Distinctive Scholars throughout archdiocese, is going places