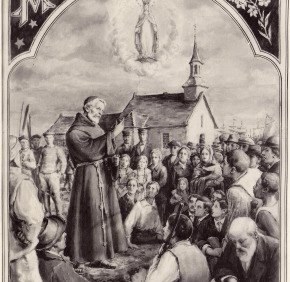 Catholic News Service
QUEBEC CITY — Canada owes him the return of the Franciscans, the founding of the country’s largest Marian sanctuary, and the development of strong and lasting ties between the French Canadians and the Holy Land. Yet, 100 years after his death and though he might become Canada’s next saint, Blessed Frederic Janssoone still remains largely unknown to many people in Quebec.
Franciscan Father Roland Bonenfant awaited 2016 restlessly, knowing it would coincide with the 100th anniversary of the death of Pere Frederic, as he is known. As vice postulator of his sainthood cause, Father Bonenfant plans to celebrate all year long the life and deeds of a fellow Franciscan he already considers to be a saint.
Father Bonenfant said Pere Frederic’s “first and foremost heritage is the way he developed strong bonds between the Catholics of Canada and the spiritual roots of their religion — namely the Middle East places where Jesus, the apostles and the first witnesses of Christ have lived,” he said, before even mentioning Our Lady of the Cape Shrine.
Born in 1838 in northern France, Frederic Janssoone joined the Franciscans in 1864 and was ordained in 1870. From 1876 to 1888, he was the custodial vicar of the Holy Land, assisting the custos with care of holy places. These 12 years left a strong imprint on him; he developed a deep attachment to the Holy Land as he got more and more involved in its development and renewal. He re-established the Way of the Cross processions on Jerusalem’s Via Dolorosa — a first in almost 250 years. He also built ecumenical ties with representatives of other Christian churches.
In 1888, his superiors sent him to Canada to resurrect the Franciscans and establish the Commissariat of the Holy Land.
“When he arrived here, he was surrounded by the aura of the Holy Land and the aura of the Recollects, who were deeply loved, back then,” said Father Bonenfant. As time went by, Pere Frederic became more and more involved in the spiritual life of the Canadian church. He contributed to the foundation and the development of a Marian shrine in Trois-Rivieres.
One key aspect of his work often overlooked today are his door-to-door visits to the local people.
“He was considerate and had a special connection with the French Canadian families, as well as with poor people,” said the vice postulator.
Local historian Rene Beaudoin also stressed the impact of Pere Frederic’s visits in the Trois-Rivieres region.
“It gave him the chance to build ties with families and to become a popular figure in the region. This has had a tremendous impact,” said Beaudoin, who teaches history at Trois-Rivieres’ Lafleche College.
Over the years, however, the church has been faced with a challenge: How is the faith of Pere Frederic still relevant, today? The Franciscan and his austere piety were grounded in the church of his time, but might seem outdated in today’s reality.
“We’re constantly facing the need to update and renew (Pere Frederic’s) religious heritage,” said Oblate Father Pierre-Olivier Tremblay, rector of Our Lady of the Cape Shrine. “I don’t have the slightest doubt that this man is a saint and an inspiring figure of our church. I sincerely believe that he’s still meaningful to us today.”
He said Pere Frederic is still in the hearts and minds of many Canadians, even a century after his death.
“We now live in a thoroughly secular world and in a society that has a tormented relationship with its own history and religious heritage. We’re not trying to adulterate the spiritual journey of an individual such as Pere Frederic. Yet, we try to put forward the aspects (of his spirituality) that are the most universal,” said Father Tremblay.
Brigitte Caulier, who teaches Canadian religious history at Laval University in Quebec City, said there is a tendency to water down and rebrand some key elements of the spiritual life of some church figures. She said this should not happen with Pere Frederic.
“I don’t think it would be a good idea to adapt and rebrand his story (so to align it with our current religious sensibilities). By doing so, we adulterate him and his spirituality. The piety he promoted was indeed austere and demanding. Yet, that’s precisely how things were back then,” Caulier said.
She said the potential saint’s heritage mainly rests on the fact that he was a charismatic, popular figure, first and foremost because of his reputation as a miracle-worker. It’s mainly because of him, and the miracles associated with him, that the crowds flocked to the Our Lady of the Cape Shrine, thus allowing it to blossom and thrive.
Father Bonenfant said he hopes his fellow Franciscan will be canonized sometime in 2017.
“I’m only sure of one thing: His canonization will happen in due time. (Pere Frederic) isn’t like the other Canadian saints or blessed: He’s somehow special and has an extraordinary stature, as his own personal story is interwoven with the land of Jesus of Nazareth,” the postulator said. “And he’s injected that in the bloodstream of the Canadian people.”