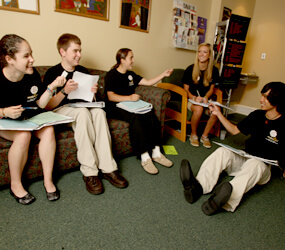 Kelly Randolph and Christian Santarpia asked veterans of the Archdiocese of Baltimore’s High School Leadership Institute – better known as High LI – what their own experience would be like.

The answers were the same – lives would be altered.

Sure enough, Kelly and Christian were ready to change the world by the end of 2009’s High LI, which ran July 26-Aug. 1 at the Monsignor O’Dwyer Retreat House in Sparks

The week brought together 59 high school-aged, archdiocesan teens for what many described as “a spiritual boot camp.” High LI’s goal is to equip participants to return to their parishes and schools for ministry leadership.

Teens were separated in three different tracks – Acts 29, Emmaus and Source and Summit.

Acts 29, in which Kelly was assigned, featured training for service on leadership teams and councils.

“So many tell you that you should help people, but I’ve never gotten such a firm foundation for why – the dignity of other people” said Kelly, 17, a parishioner of Immaculate Heart of Mary in Baynesville. “It was overwhelming in the most positive way.”

Christian was in Emmaus and received training to be a peer minister as part of the track. Source and Summit trained in liturgical ministries.

Jen Holcomb, a 17-year-old parishioner of St. John the Evangelist in Frederick and a student at St. John’s Catholic Prep in Frederick, said Source and Summit was revealing.

“I have so much more respect for the parish staff and what they do,” Jen said. “It’s actually helped me understand the Mass. When you break it down, you see how much goes into it and all the history.”

Participants were chosen by their youth minister or campus minister. The cost of participating is $650, but many parishes and schools help by sponsoring teens.

“They’re told from the start, it’s a huge investment in them,” said Margaret Brogden, the director of High LI and the archdiocese’s coordinator youth ministry formation.

Once the teens arrived, the scope of their responsibilities became apparent. The fate of house meetings, daily Masses, prayer service and activities rested in their hands.

The teens made video presentations that were scrutinized until each participant showed they could effectively communicate their messages.

“Even though the evaluations may seem critical, it’s a learning experience because you learn from your mistakes,” said Francesca Cerquetti, a 17-year-old parishioner of St. Joseph in Fullerton and a student at Maryvale Preparatory School in Brooklandville.

Auxiliary Bishop Denis J. Madden participated in an Aug. 31 question and answer session, fielding queries on maintaining faith in troubled times and the church’s commitment to the poor.

He also participated in a prayer service and celebrated Mass.

“God doesn’t call us necessarily because we have particular talents,” he told them. “God calls us because he knows us as we are and what’s really deep inside us and what qualities we possess.”

“It really does work and God is awesome,” Brogden said of High LI. “You look around and it’s changing them. It’s not us doing it. It’s God doing it.”