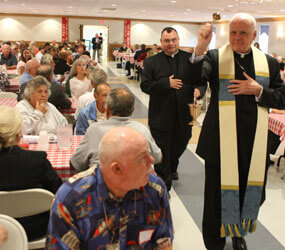 The parish council president of St. Ignatius stood in the middle of the parish center Sept. 12, surrounded by hundreds of fellow parishioners, all volunteers being honored for their service with a picnic lunch.

It was just one example of how the parish center, after a series of renovations and additions, was to be used.

The result of the work: eight new classrooms, bringing the total to 14; a small library and waiting room for families; a new youth room and a handicapped accessible elevator. The building’s mechanical systems were replaced to adhere to code.

Now, the parish has a campus feeling.

“It’s so exciting to be here,” said Mayor, who thought about the lives that would be improved inside the parish center. “With a growing parish, being able to have state of the art classrooms for the children is wonderful. That is the most important thing: to be able to further their faith.”

Archbishop Edwin F. O’Brien celebrated noon Mass at St. Ignatius, then blessed and dedicated the parish center. He said everything about St. Ignatius is “first class.”

He continued, “Today’s dedication and blessing of your new parish hall and catechetical center represents a remarkably successful effort on the part of your pastor … and the whole parish, to help keep in stride with the exceptional growth of St. Ignatius.”

The parish, he noted, has grown from 2,400 families a decade ago to 4,200. The archbishop said the renovations were a testimony to the parish’s generosity and vibrant faith.

Monsignor James Barker, pastor, told parishioners that the center additions had been in the planning stages since 2005.

“All of you have waited, prayed and sacrificed so much to get to this point,” Monsignor Barker said at the end of Mass.

The improvements were made possible by St. Ignatius’ $5 million capital campaign, “Vision 2017, A Proud Heritage … A Glorious Future.” It also resulted in renovations to the parish’s historic 1792 church, the oldest in continuous use in the Archdiocese of Baltimore.

Monsignor Barker said the parish hopes to have the renovations paid off by 2017, when St. Ignatius celebrates its 225th anniversary.

“With today’s blessing and dedication,” he said, “we are well on our way to that glorious future and that goal.”

Mayor said none of the recent renovations would have been accomplished without Monsignor Barker’s leadership.

“He’s the most well-organized person,” Mayor said. “He’s most excellent for the parish. Bringing all of the groups together is no easy task, but he does that.”