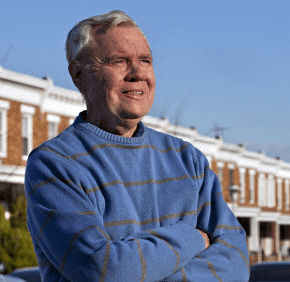 When the simmering mortgage crisis boiled over in 2008, Vinnie Quayle – near the end of a long career of fighting the good fight – was tired.

Quayle is the face and soul of the St. Ambrose Housing Aid Center, which he founded in 1968 with a Jesuit mentor and Monsignor Edward Miller, now pastor of St. Bernardine Parish in Baltimore.

A longtime parishioner of St. Francis of Assisi in Mayfield, Quayle helped thousands of low- and middle-income families buy homes.

Named for the Park Heights parish where Monsignor Miller was assigned in 1968, St. Ambrose is the city’s oldest nonprofit housing provider. It has served more than 100,000 families since it began. Each year, some 3,000 new families get assistance.

As people across the country began losing their homes because they should never have been given mortgages in the first place – instead of traditional pitfalls such as illness, divorce or unemployment – Quayle knew a disturbing shift had taken place.

“Something different was going on, but by then we had mellowed,” Quayle said recently, amid continuing foreclosures. “Back in the old days we’d have been out picketing banks and raising hell.”

At the end of 2011, the 72-year-old Quayle decided to retire after 43 years in the fair-housing game, a smart and brave run in which, before the current crisis, only a handful of families helped by St. Ambrose families lost their homes.

Quayle, who as St. Ambrose director oversaw the development of the Marian House in Waverly for women “moving from dependence to independence” and their children, is going to take it easy now. Or so he says.

A student of the late Indian Jesuit and mystic Anthony De Mello, Quayle said he will now choose, perhaps in the spirit of the prayer of St. Teresa of Avila, to let nothing disturb him.

“I refuse to get angry,” he said. “Now that I’m retired, I’m not getting angry about anything. I’m going to do everything slowly.”

Perhaps that’s because the former Jesuit priest – taught in high school by Jesuit Father Daniel Berrigan, of Catonsville Nine fame, at Brooklyn Jesuit Prep in the 1950s – gave everything he had to his lay vocation.

Quayle spoke as he drove to Timonium to be fitted for a tuxedo in advance of being named 2012 “Hibernian of the Year” by the local Irish-American society.

He will receive that honor March 15 at the 209th anniversary dinner of the Hibernian Society of Baltimore.

“There’s no more noble deed than helping people find homes and Vinnie fought his rear end off to do it,” said Daniel P. Cahill, president of the Hibernian Society of Baltimore and parishioner of Church of the Immaculate Conception in Towson.

Married to the former Patricia Connolly – a School Sister of Notre Dame before the couple opted for secular life – the Quayles reared three boys off Walther Boulevard in the Beverly Hills section of Northeast Baltimore. Their sons, Thomas, Matthew and Paul, are all practicing Catholics.

“I thought we’d solve all of the city’s housing problems, that we could really help people own their homes,” said Quayle, looking back on 1968, a year of miracles and nightmares. “We were believers.”

In the 1960s, he said, there was plenty of federal money, open-mindedness, people with their hearts in the right places and religious willing to work beyond the parish. Unemployment hovered around 3 percent.

“But there were larger forces,” said Quayle, humbled by the world. “Drugs and the breakdown of the family and loss of jobs. It was all bigger than us and we didn’t realize it.”

Quayle is looking forward to long-delayed vacations and quiet afternoons watching the goats and llamas in the St. Peter cemetery off Baker and Bentalou streets in Southwest Baltimore. He wishes Joab all the luck in the world.