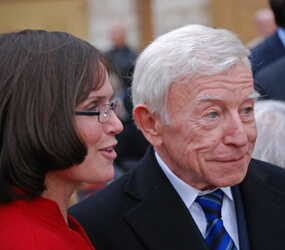 WASHINGTON – John and James were pals in high school who kept up that friendship after they graduated from St. Joseph Prep School in Philadelphia more than 55 years ago.

John is U.S. Cardinal John P. Foley, pro-grand master of the Knights of the Holy Sepulcher and formerly the 23-year president of the Pontifical Council for Social Communications.

James was James Bateman, who later changed his name to Henry Gibson, a fixture with his offbeat poems and deadpan delivery on the TV smash “Rowan and Martin’s Laugh-In,” which aired from 1968 to 1973.

Gibson died Sept. 14 at his home in Malibu, Calif., seven days before his 74th birthday. His son Jon said the cause of death was cancer.

The cardinal remembers Gibson fondly, as have legions of baby boomers who grew up following Gibson on “Laugh-In” and a subsequent film and television career.

“I just wrote to his widow yesterday. He was a good friend,” Cardinal Foley told Catholic News Service Sept. 18.

“He had been here for the ceremonies when I was made a cardinal, and he was also attempting to interest people in the work of the church in the Holy Land, too, which was very nice of him,” the cardinal added.

Gibson had done some fundraising for the church in the Holy Land after Cardinal Foley was appointed to his post with the Knights of the Holy Sepulcher.

Cardinal Foley and Gibson, while classmates at St. Joseph Prep, had acted in different plays together

“He was a wonderful person, a delightful person,” Cardinal Foley said. “He was always an excellent person, a very good actor and a good friend.”

Gibson, after graduating from high school, graduated from the theater program at The Catholic University of America in Washington.

He got his stage name from his fellow Catholic University theater grad, Jon Voight, who outlined an act in which the two of them would play “brothers from the Ozarks who represented the United States on cultural tours and caused riots where they went,” Voight told The New York Times Sept. 16. “I gave him the name Henry Gibson, which I got from (Norwegian playwright) Henrik Ibsen.”

Once they got a booking, Voight backed out, but Gibson took his new persona to the stage solo, which found favor with audience, leading to a poetry album and to a career in film and TV.

He had guest appearances on such TV shows as “The Joey Bishop Show,” “77 Sunset Strip,” “The Beverly Hillbillies,” “My Favorite Martian,” “The Dick Van Dyke Show” and “F Troop” before “Laugh-In” hit it big.

Following up on his “Laugh-In” success, he gave voice to Wilbur the pig in the 1973 animated film version of “Charlotte’s Web,” and acted in several segments of the anthology “Love American Style.”

He won a best supporting actor award from the National Society of Film Critics for his role as superpatriot Haven Hamilton in Robert Altman’s country-music opus “Nashville.” He earned Golden Globe nominations for his acting and his contributions to the film’s score.

But with few exceptions, Gibson contented himself with onetime guest appearances for TV as well as the occasional movie role.

He did more cartoon work, giving voice to two high-school lockers in the 1986 series “Galaxy High School,” Lord Pain in three episodes of the 2001 cartoon series “Grim & Evil,” and Bob Jenkins in seven episodes of “King of the Hill.”