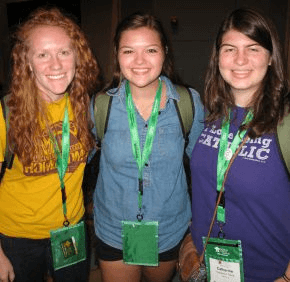 PHILADELPHIA – The time to educate young people about leading lives of sexual integrity doesn’t start when they hit puberty,  Erika Bachiochi told a crowd of hundreds during a Sept. 24 address at the World Meeting of Families.

Parents must set their children on the right path from their earliest years, she said.

“If teenage boys and girls are going to resist the urgings of their bodies and the cultural pressures toward recreational sexual encounters,” Bachiochi said, “self mastery must be learned in the smallest of ways in the earliest years at home.”

The nationally known author of “Women, Sex and the Church: A Case for Catholic Teaching” said mothers and fathers begin those lessons by teaching table manners, proper respect for authority, dignity for others, moderate eating habits and responsible participation in household chores.

“If our children are habituated to give in to their body’s every desire in little things or to remain sluggish in the face of family responsibilities,” she explained, “even well-catechized, intellectually converted teens will be hard pressed to resist the allure of a premarital sexual relationship.”

Bachiochi’s talk, “No Strings Attached? Responding to the Hookup Culture,” emphasized that peppering young adults with religious prohibitions isn’t going to be much help. Instead, she said, “robust and attractive” alternatives to the hookup culture must be given.

“The desire for long-term commitment in marriage does persist among the young, even if they are becoming increasingly cynical about the possibility of such commitment,” she said. “We need to ride the wave of this desire, helping young people see how compulsory carelessness affects their aspirations for lifelong love and that the sooner relationships become sexual, the more likely they are to fail.”

Bachiochi warned against language about sex and the body that gets caught up in “some sort of Gnosticism – that the body and sex are bad.”

“It ought to be a positive and authentic message about the merits and joys of faithful , fruitful, lifelong love,” she said.

Following Bachiochi’s talk, several students from Loras College in Dubuque, Iowa, said the hookup culture is very much alive among young people,  but it is not universal.

“A lot of it has to do with the groups on campus that you are involved in,” said Rachel Hundt, a 19-year-old sophomore from Wisconsin. “Groups that party super hard, like sports teams, are more prone to it versus those in campus ministry.”

Hundt said she sees two camps in the church: one that tells those who have had premarital sex they are going to hell and another that tell them it’s possible to start over and be reconciled.

“The section that says you are going to hell now is a lot louder than the section that’s more understanding,” she said. “ That’s what turns a lot of people off. They get this in their head , ‘Oh I did it once, I’m forever a lost cause.’”

Katie Tooze, a 20-year-old sophomore from Illinois, said it’s wrong to judge a person for one mistake.

“They’re more than that,” she said. “We need to not look at sin as a defining everything about a person.”