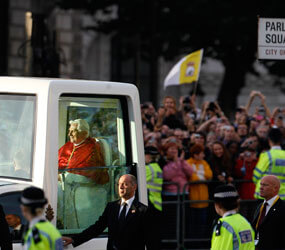 Addressing the midday rally of about 300 outside St. Mary’s University College in Twickenham Sept. 17, gay rights campaigner Peter Tatchell said covering up sexual abuse was the “most serious charge” against the 83-year-old pontiff.

Tatchell, whose words were greeted with applause and shouts of “Shame,” added that the pope was unfit to lead the church and should resign.

The chairman of the Gay and Lesbian Humanist Association, Derek Lennard, whose group organized the demonstration, said the pope “encouraged hatred of gays” at a time when at least 80 countries routinely imprisoned homosexuals and at least eight executed them.

He added that Pope Benedict should take responsibility for attacks on gays and lesbians around the world and said it was “astonishing” the pope’s state visit was government-funded.

“The pope is a priest of ‘endarkenment’ rather than enlightenment, and the church should not be allowed to have such an influence,” he told the rally.

Banners at the protest included the slogans, “Put the pope on trial” and “Pope, protector of pedophile priests.”

One demonstrator held a placard that read: “Science flies you to the moon, religion flies you into buildings.”

Protesters laughed at a young man who walked past reciting the Hail Mary and angrily heckled a group of evangelical Christians from New Jersey who used a loudspeaker to call on homosexuals to repent.

Nina Kaye, who came to the demonstration with her husband and son, held up a banner that read, “Prosecute pedophile priests.”

“I’m just so angry that the terrible abuse by priests is being covered up,” she told Catholic News Service. “Pedophilia isn’t an illness, as the pope said, but a crime, and the church shouldn’t be placing itself above the law.”

The pope’s visit to the college included prayers with representatives of religious congregations, as well as a gathering with students and a meeting with interreligious leaders.

By the time the pope left, demonstrators were heavily outnumbered by hundreds of excited children from two nearby Catholic schools, who arrived at the scene waving Vatican flags.

Some protesters who gathered outside Westminster Abbey later in the day had some unusual beliefs about the pope.

“We are totally against this visit and what the pope stands for, especially his claim to be in the position of God,” said the Rev. Edward Cordle, a Reformed Baptist minister from Essex, England.

The pastor told CNS he agreed with Pope Benedict on “some moral issues,” but was “strongly against his anti-Christian claims.”

“We hope people will see there’s still a Christian voice here which believes salvation comes through Christ alone – this papal visit is a betrayal of our Protestant constitution,” the Baptist minister said.

Banners outside the abbey included the statements, “The pope is the Antichrist” and “Exalt Christ not the pope,” and were positioned in front of a stage for TV cameras.

Mark Fothergill, an Anglican book illustrator from the northern county of Cumbria, told CNS: “We have nothing to do with the militant atheists who are also demonstrating against this visit. We simply want to remind the world that there are other Christian voices here, as well as Roman Catholics.”

Members of organizations representing clergy abuse victims from five countries circulated leaflets outside the Catholic Westminster Cathedral, half a mile from Westminster Abbey. They said their aim was “to help kids who are being abused now, safeguard kids at risk of being abused and uncover hidden clergy sex crimes and cover-ups.”

“We ask you and your fellow-Catholics to insist on real reform, not just lip service and window dressing from church officials,” the leaflet said.

“While a few complicit church officials have voluntarily resigned, no one has ever been demoted, disciplined or defrocked for putting children in harm’s way. Until bishops experience real consequences for covering up crimes, kids will continue to be unsafe,” the pamphlet said.