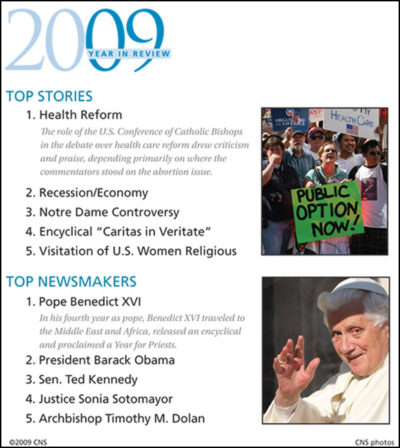 WASHINGTON – The debate over health care reform topped the religious news stories of 2009, and Pope Benedict XVI and President Barack Obama were again the top newsmakers, according to the annual poll conducted by Catholic News Service.

The continued effects of the recession on the U.S. and global economy took second place among the 30 news stories on the ballot. The controversy over Obama’s commencement address at the University of Notre Dame in May and the decision to award the president with an honorary degree came in third.

Most first-place votes on the newsmakers list went to either Obama or Pope Benedict, although the pope was the clear winner this year. The late Sen. Ted Kennedy of Massachusetts was a distant third.

The poll was the 48th annual survey conducted by CNS. This year’s ballots were distributed Dec. 4 and the deadline for returns was Dec. 10.

When the editors’ poll was first conducted in 1962, the overwhelming choice for top story was the opening of the Second Vatican Council. Last year, editors chose the election of the first African-American U.S. president and controversy surrounding the role of Catholic voters in the campaign as the top religious story of the year. Pope Benedict and Obama were the top newsmakers.

Eleven different stories received first-place votes, including three that did not make the top 10.

With 29 editors and CNS staff members submitting ballots, the maximum points a story could have received was 290. The most a newsmaker could receive on the five-point scale was 140, because one editor voted only for top stories and not newsmakers.

Rounding out the top five for religious news stories were the papal encyclical “Caritas in Veritate” (“Charity in Truth”) and the Vatican-ordered visitation of U.S. women religious, which was to continue into 2010.

Pope Benedict took first place in the CNS poll for his travels to the Middle East and Africa, his outreach to Anglicans and traditionalist Catholics and his proclamation of a Year for Priests. Obama, whose first year as president included the Notre Dame controversy, his reception of the Nobel Peace Prize and a fight over abortion funding in health reform legislation, was second.

The next three top newsmakers were separated by only one vote each. The late Sen. Ted Kennedy of Massachusetts was third, new Supreme Court Justice Sonia Sotomayor fourth and Archbishop Timothy M. Dolan, named to head the New York Archdiocese in February, was fifth.

Here are the choices for top 10 stories and top five newsmakers of 2009, followed by points received in the weighted ballot count and, in parentheses, the number of first-place votes received.

Also receiving first-place votes were climate change, sainthood causes and the wars in Afghanistan and Iraq.