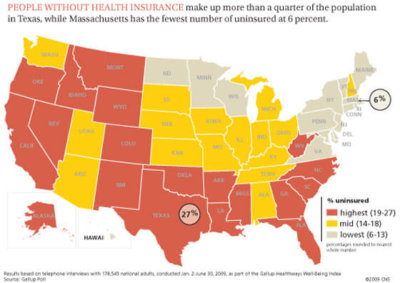 WASHINGTON – As members of Congress returned to Washington after their summer recess, much of the focus for the hottest topic before them – health care reform – seemed to be farther north, in Massachusetts.

The Joint Committee on Election Laws of the commonwealth’s legislature was to hold a hearing Sept. 9 on a bill that would permit the appointment of an interim successor to the late U.S. Sen. Edward M. Kennedy, a key figure in the health reform debate as chairman of the Senate Health, Education, Labor and Pensions Committee.

The interim senator, who would be appointed by Massachusetts Gov. Deval Patrick, a Democrat, would serve until a Jan. 19 special election to finish out Kennedy’s term, which would have ended in 2013.

Some are looking to Massachusetts’ success in covering the uninsured to help shape national health reform legislation after members of Congress found a confused and often contentious public in their districts during the recess.

At the other end of the spectrum, more than a quarter of the residents of Texas and New Mexico were without health insurance, according to Gallup, while 22 to 24 percent of those in Mississippi, Louisiana, Nevada and Oklahoma were uninsured.

The margin of error for most states was plus or minus 1 or 2 percentage points, Gallup said, but could be as high as 4 percentage points for smaller states such as Wyoming, Delaware and Hawaii.

Many think the Massachusetts experience can teach important lessons to those trying to achieve health reform at the national level. Since the program began, the number of people with health insurance in Massachusetts has increased by more than 430,000.

Health reform in Massachusetts is “something that has worked,” said Jon Kingsdale, executive director of the Commonwealth Health Insurance Connector Authority, at a Sept. 1 briefing in Washington. “I do not consider this an experiment anymore. It’s achieved its goal of covering most people.”

Key elements of the Massachusetts plan are a mandate on individuals to purchase health insurance or face a financial penalty of up to $912 annually; a mandate on those employing 11 or more people to contribute to their employees’ health coverage or pay an annual penalty of $295 per employee; an insurance exchange for individuals and small businesses to purchase insurance; subsidies for those making up to 300 percent of the federal poverty level ($32,490 for an individual in 2009); and an aggressive outreach program to inform people and enroll them in appropriate programs.

Many of those elements are part of the health reform proposal drawn up by Kennedy’s committee. But that is far from the only proposal, and another will be added when a bipartisan group of six members of the Senate Finance Committee unveil its plan. The so-called “Gang of Six” has set a Sept. 15 deadline for their work.

The biggest challenge facing Obama and the Congress might be educating Americans about the plans. Obama planned to address a joint session of Congress Sept. 9 on health reform.

A CBS News poll Sept. 1 found that two-thirds of respondents described the health care plans under discussion in Congress as confusing and 60 percent said Obama had not “clearly explained his plans for health care reform.”

The telephone survey, conducted Aug. 27-31, also found a significant drop since June in the percentage of Americans who believe the government can do a better job than insurance companies in keeping health costs down. Although 59 percent thought government could do better in June, only 47 percent said they thought so in the recent poll.

The margin of error for the poll was plus or minus 3 percentage points.

Amy Whitcomb Slemmer, executive director of Health Care for All, a Boston-based nonprofit group dedicated to creating a consumer-based health care system, said at the Washington briefing that the national health reform effort should take a lesson from Massachusetts’ “significant investment in education and outreach opportunities” and its commitment to “culturally relevant information.”

Slemmer said that, although the Massachusetts plan has made a “life-changing difference” to the more than 400,000 newly insured, the problem remains of insuring those who make too much to receive state subsidies but still cannot afford to buy health insurance.

Much greater challenges are ahead in Washington, and it is not going to be easy, if comments by Republican Sen. Lamar Alexander of Tennessee in a Sept. 1 telephone briefing for reporters are any indication.

He said Republican senators found during the summer recess that “the American people believe we are headed in the wrong direction on health reform and want us to come back to Washington and start over.”