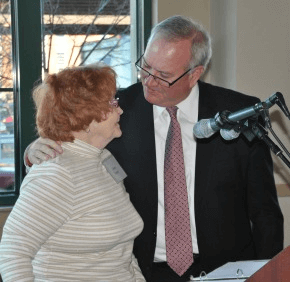 By Maria Wiering
mwiering@CatholicReview.org
Catholic Charities of Baltimore celebrated reaching a new fundraising high and other 2014 achievements at its 34th annual Leadership Breakfast Dec. 10.
“I am humbled by your continued generosity that not only sustains our work but allows us to innovate, evolve, change and – when appropriate – expand services to meet the needs of our community and neighbors,” said William J. McCarthy Jr., the organization’s executive director, to the 170 attendees.
The Catholic Charities Leadership Breakfast Celebration is the capstone of an annual fundraising campaign, which garnered $3.4 million this year.
While falling short of its $4 million goal, the amount is an all-time high for the fundraiser. Next year’s goal is $5 million, McCarthy said.
The funds support the programs of the Archdiocese of Baltimore’s Catholic Charities, the third-largest in the country. According to its 2014 annual report, 90 percent of its operating funds go to direct services for people in need.
McCarthy noted that in 2014, it expanded its Baltimore Head Start programs, its Esperanza Center has connected 481 unaccompanied immigrant minors with U.S. sponsors, and the agency helped more than 11,000 people with emergency and case management services.
Catholic Charities programs served 247,000 annual meals five years ago, when McCarthy took the helm. In 2014, he said, they served more than 522,000.
‘A huge difference to that one’
Catholic Charities highlighted a well-known anecdote for the theme of its annual report – the story of a girl tossing beached starfish back into the ocean, one by one. A man asks her why she does it, since she couldn’t possibly throw them all back. She responds, after tossing another starfish into the ocean, “It made a huge difference to that one.”
By using the metaphor, “I suggest that we not be deterred by the enormity of poverty of any issue that seems intractable,” McCarthy said at the breakfast. “We should be the ‘one’ who makes a difference to one person, tackles one issue, rights one wrong. That’s what really matters.”
The “one person” Catholic Charites highlighted this year was Virginia Roper, a resident of Village Crossroads I, Catholic Charities senior housing in Nottingham.
Roper shared her story of hard work throughout her life, but becoming dependent on others for care after suffering a heart attack in 2012. When a living arrangement with family members unraveled, her granddaughter connected her with Catholic Charities, which opened Village Crossroads I and II late last year. Roper moved in last December.
“I am living independently now, and without them, I couldn’t,” she said of Catholic Charities.
‘A shining light’
McCarthy noted that Catholic Charities recently approved a new strategic plan that assessed its environment, organizational culture and business model. As a result, the organization set goals to expand and enhance services to assist more people, specifically through health care and services that promote and sustain independence; boost organizational performance and efficiency; and enrich its colleagues’ and stakeholders’ experience.
In remarks at the end of the breakfast, Archbishop William E. Lori, Catholic Charities’ board chairman, reiterated Pope Francis’ description of the church as a field hospital, and noted that the organization “touched the lives of some 400,000 people” in 2014.
“Because of our faith, because of our commitment to compassion and human dignity, we are reaching out one person at a time in love,” he said. “It’s that healing, and that compassion and respect that has made Catholic Charities not only effective, but a shining light in our church and our community.”
Also see:
NDP Scouts spread serenity among Charities’ clients
Catholic Charities not daunted by immigrant proposal push-back
PrevNext