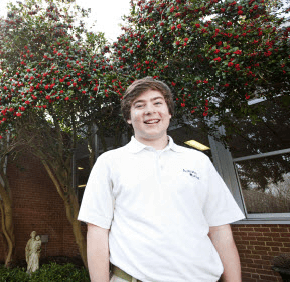 By Maria Wiering
mwiering@CatholicReview.org
SEVERN – Classic Christmas carols were at the core of an hour-long preview concert Archbishop Spalding High School students gave Dec. 9, but a 13-member guitar ensemble added a twist with a classic of another kind: Led Zeppelin’s “Stairway to Heaven” woven into a rendition of “Carol of the Bells.”
The guitar ensemble is one of 13 music groups at the co-educational high school, which has a reputation for a strong music program.
Offering a variety of music groups makes the school’s program unique, said Beth Hough, Spalding’s music department chairwoman. It has six choirs, three bands, two jazz bands, a string ensemble and the guitar ensemble – the last being a rarity among high school music programs.
It also offers 12 competitive musical scholarships to members of the incoming freshman class.
The short concert was an opportunity for some ensembles to practice before an audience while reaching out to the community. Students from three local elementary schools, including Monsignor Slade Catholic School in Glen Burnie and St. John the Evangelist School in Severna Park, attended the concert, as well as residents of several assisted-living facilities and grandparents of Spalding freshmen.
All ensembles will perform at a three-hour Christmas concert 7 p.m. Dec. 12 at the school.
See video of a concert preview performance.
About 300 students, or one-fourth of the school’s student body, are in the music program, Hough said. Most ensembles meet during class time, but a jazz band practices at 6:45 a.m.
Malachi White, a junior, participates in all-male and “mixed” – male and female – vocal ensembles. An alumnus of the prestigious Maryland State Boychoir, 16-year-old White chose Spalding because of its music program. A vocal scholarship recipient, he credits the program with expanding his musical repertoire from classical pieces to gospel and rock ‘n’ roll.
White also appreciates that it draws a cross-section of students.
“When you look at the people who are on the stage performing, you’ll notice there are swimmers, there are football players, there are lacrosse players, track (and) cross country (athletes),” he said. “Music is one of the common denominators at our school, everyone can see we all love and enjoy doing it.”
His classmate, trumpeter Eric Urbanas, agreed that the music ensembles build “a good sense of solidarity and camaraderie” among students from different grades and social groups.
Stephanie Huesgen, a music teacher and the program’s founder, said that playing music fosters students’ life skills.
“It’s the only class where they use both sides of their brain,” she said.
Urbanas said participating in band has improved his time management and personal organization. Sophomore Max Klemm said understanding music has bolstered his math skills. His classmate, Camryn Bowcutt, an alto in several vocal ensembles, said the program has boosted her sociability and confidence in trying new things with her voice.
Hough, who has taught music at Spalding for 20 years, said the ensembles provide “a great outlet for students to express themselves artistically.”
The school boasts several alumni who have careers in music, from Broadway and opera performers to music teachers. Hough estimated that five students from each graduating class pursue music-related studies or work.
Also see:
Beyond the Bell: With school-wide support, annual musicals take John Carroll’s spotlight
Beyond the Bell: Mount de Sales Club supports the troops
Beyond the Bell: Social Justice Coalition at Maryvale makes a difference
Beyond the Bell: Seton Keough’s A Cappella choir
Beyond the Bell: Catholic High robotics team raises the bar
Beyond the Bell: St. Frances Academy football takes leap of faith
Beyond the Bell: Calvert Hall’s peer ministry program makes faith cool
PrevNext