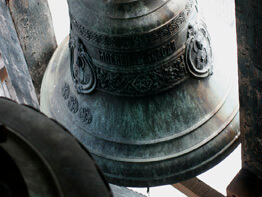 MOSCOW – Harvard University will return a collection of historic bells to the Russian Orthodox Church more than seven decades after they were seized and sold by the regime of Josef Stalin.

“These bells are not only a witness, but also a victim of history, a symbol of the independence, greatness and identity of the people,” Russian Orthodox Patriarch Alexy II of Moscow said March 21. “I’m happy our guests from Harvard University could feel this part of the Russian soul, conveyed through the tolling of church bells.”

Orthodox and Harvard representatives signed an agreement to return the 18 bells to Moscow’s Danilov Monastery, which has housed the Moscow Patriarchate since being reopened in 1988.

A representative of Russian President Vladimir Putin, Georgy Poltavchenko, told the Interfax news agency the agreement was made possible by a “change of position” by authorities at Harvard, who had become “aware of the historic significance of the bells for the Russian Orthodox Church and for Russian culture and the state in general.”

Charles Crane, a U.S. diplomat, purchased the 17th-century bells, embossed with icons and verses, for about $17,700 in 1930, when most of Moscow’s estimated 5,000 church bells had been confiscated and melted down. He donated them to Harvard University.

The collection, including a 13-ton bell, was shipped by steamer to Cambridge, Mass., and later was installed by a Russian expert in a specially designed bell tower of Harvard’s Lowell House.

Danilov monks requested the return of the bells during a 1988 Moscow visit by U.S. President Ronald W. Reagan, and when their superior, Archimandrite Alexy Polikarpov, visited Harvard in December 2003.

The collection is expected to be dismantled from Lowell House and shipped to Moscow in August 2008. A separate bell at the Harvard University Business School also will be returned.

A Harvard statement said the Russian delegation had “acknowledged Harvard’s legal ownership of the bells,” which played “an important part” in student life. However, it added that the university recognized the bells were “part of Russia’s spiritual and cultural heritage.”

Final agreement was reached after a feasibility study by Harvard on the return of the bells, which are to be replaced by exact replicas cast at a bell foundry in Voronezh, Russia.

Harvard University’s associate provost, Sean T. Buffington, who visited Voronezh March 18, said he was “stunned by the beauty” of the replacement bells, which are being funded by a Russian businessman.