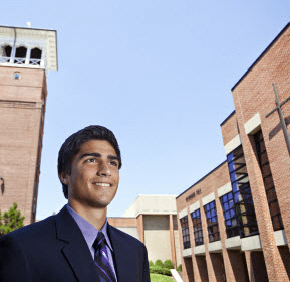 Adam Gracia was going to evolve when he entered Mount St. Joseph High School in Irvington four years ago, whether he was ready for it or not.

“I was very reserved when I got to St. Joe and kind of quiet,” Gracia remembered. “I wasn’t willing to put myself out there like I am now. The teachers pushed me to get involved and be more open to trying new things. I’ve grown as a leader for sure.”

Gracia graduated June 3 fully emboldened for his next challenge – Harvard University in the fall.

“Thinking back to my freshman year, I did not see myself going to Harvard,” Gracia admitted.

Gracia has regularly taken advanced placement courses during his four years at Mount St. Joseph, a Xaverian Brothers-run school. He took part in the order’s nationwide student leadership program, was named one of the Archdiocese of Baltimore’s Distinctive Scholars and one of Comcast’s local Leaders and Achievers.

“Mount St. Joe’s is definitely the best experience I could have had in high school,” Gracia said. “They’ve had everything I always wanted in a high school.”

As a younger student, Gracia started at the now-closed Woodmont Academy before his family moved to Guantanamo Bay in Cuba for his fourth- through sixth-grade years.

His father works for the Department of Defense and the family traveled with him. While many people around the U.S. talked about Guantanamo Bay because it housed alleged terrorists, Gracia was largely unaware of the chatter.

“I really didn’t wonder why we were on this exotic island,” Gracia said. “When we got back, I kept hearing more and more about it.”

Gracia’s mother home-school taught him and his sister during the family’s stay in Cuba, where he became a voracious reader and independent learner. He went to the beach and played soccer, a sport that would be with him throughout his academic career.

Upon returning, Gracia attended Our Lady of Perpetual Help School in Ellicott City, where he thrived, but was shy. He had the same challenge at Mount St. Joseph, but making teams in the school’s elite soccer program was affirming.

“It’s been great,” Gracia said. “I’ve been on the field with some of the kids the last four years. I’ve played with some pretty incredible players. You can’t get that exposure pretty much anywhere else and the coaches have always been there for me.”

Gracia found being involved in the Xaverian leadership program inspiring. He took ideas he heard from fellow students and brought them back to Mount St. Joseph. He worked on building a cancer awareness program, which proved timely.

The awareness program placed a tree outside the main office that bore reminders of all the people in students’ lives impacted by cancer.

“The amount of names on that tree was incredible,” Gracia said.

“I thought he was everything a teacher should be,” Gracia said. “He loved teaching more than anything else. He was teaching class via Skype. He showed the standard for all the teachers.”

During the college application process, Gracia wrote an essay for potential schools about Brother James and his impact on the Mount St. Joseph community.

Months later, a Yale University admissions officer contacted Gracia to thank him for the moving words written about Brother James, calling it one of the best essays the Ivy League school had received.

Once a reserved boy, Gracia is now a young man ready for the next chapter in his life and thankful to the Mount St. Joseph community for what it has done for him.

“I really started to evaluate conversations with teachers and classmates and staying with them just a little longer,” Gracia said.