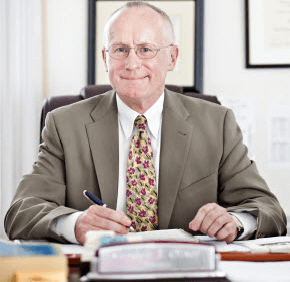 FREDERICK – It takes vision for a Catholic high school to load – lock, stock and student body – and move six miles to another campus.

Fortunately, the president of St. John’s Catholic Prep has an abundance of that intangible.

Gordon Oliver is your standard Archdiocese of Baltimore school leader – if that mold includes being born out of wedlock in England, raised in both the Anglican Church and by nuns in a Catholic school, converting to the faith as an adult and along the way being a distinguished runner.

“My wife,” Oliver remarked, “says it’s like a Dickens story.”

Or something out of the Old Testament. Oliver’s background fits right in at a school which has had multiple iterations, the next being ownership of the school and property formerly occupied by St. Thomas More Academy in Buckeystown.

In 2005, St. John’s Catholic Prep purchased an adjoining 46 acres there, where it had intended to build a new high school from scratch. Instead, by early 2013, 270 students and 50-some staff will move into what was built as a pre-K-8 school. The settlement of the purchase of the entire Buckeystown campus was announced Aug. 24.

“Given the repurposing renovations,” Oliver said, “the earliest we could get into the new building would be January.”

For one more semester then, Oliver will continue to team with principal Christopher Cosentino and staff in centuries-old Prospect Hall, where the president also happens to be the morning greeter of parents dropping off children, and a teacher of social justice, a theology class for the upper grades.

“Why me? Why am I here?” Oliver said. “I don’t pose those questions to my students, but they know I am a convert.”

He was born Andrew Skipper in Brighton, England, the product of an affair between the mayor’s accountant and maid. Adopted by John Oliver, the mayor’s personal physician, Oliver recalls being “a handful” and for a time being shipped off to a boarding school in Sussex staffed by religious women.

“I was the only non-Catholic in the school,” Oliver said. “The nuns told me the best I could do was purgatory.”

Family took him to Canada and then the Washington, D.C., area. He has a bachelor’s in English from Georgetown University, and a master’s in theological studies from Christendom College in Front Royal, Va. That was earned in 2003, nearly a decade after he joined the faith of his wife, Sandra.

“I was baptized Episcopalian, but I felt a great affinity for the tradition,” Oliver said. “I had been exposed to the sacraments, the liturgy. The choice was mine to make.”

The two had met in 1980 in Jamaica, where both were teaching and Oliver began to coach.

His own track career includes winning the Penn Relays high school mile in 1972 for Bethesda-Chevy Chase High in 4 minutes, 8.7 seconds. It stood as the record at the world’s largest annual track meet until 2007, when it was bettered by Broadneck High’s Matt Centrowitz, who went on to a fourth-place finish at the London Olympic 1,500 meters.

At Georgetown, Oliver became an Olympic-caliber athlete himself, dropping his mile best to 4:02.

That background is beneficial as he endeavors to unify assorted alumni constituencies, including a group that came through in the late 1990s, when the school had an ill-fated dalliance with big-time basketball, one that fractured the community.

The school has evolved since 1829 from all-boys St. John’s Literary Institution at the eponymous parish in downtown Frederick to St. John at Prospect Hall, the first independent Catholic school in Maryland according to its website; to one that once encompassed middle- schoolers.

“When I got here in 1983, the junior class was the last that had had begun here as sixth-graders,” said Marge Pieklo, executive assistant and font of institutional knowledge. “After the School Sisters of Notre Dame left (in 1972), parents worked with the archdiocese to keep it open.

“Some years, it was ‘Prospect Hall High School’ on transcripts, the school was run by the parents and the headmaster, no nuns, no priests.”

“Gordon has paid attention to that which is truly Catholic,” Monsignor Jaskot said. “He has reached out to pastors. That’s vital, because Frederick County is one of the few regions in the archdiocese in which every parish is growing.”

A resident of Springfield, Va., Oliver can commiserate with students who commute from that state, Pennsylvania and West Virginia, let alone neighboring counties in Maryland.

“The rapport the staff has with parents and students is pretty exciting,” said Cosentino, who is entering his seventh year as principal. “Gordon brought some of that about. Students, teachers, parents, myself, we all appreciate his visibility.”

Monsignor Jaskot also noted a quality that reflects all that Oliver has done and seen.

“One of the things I like,” he said, “Gordon moves a meeting along.”

Home parish: Church of the Nativity in Burke, Va.

Faith facts: Oliver is a fourth degree Knights of Columbus; He and his wife, Sandra, celebrated their 30th wedding anniversary in 2011 with a trip to the Vatican

Quote: “My role is to help all aspects of the school. If I have to pick up a broom and a mop … ”