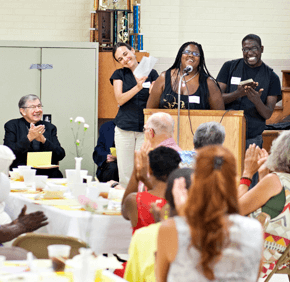 A $10,000 Catholic Campaign for Human Development (CCHD) grant is helping to fund a youths-based community service group at My Brother’s Keeper in Irvington, giving youths a voice and helping them to change their community.

Nikotris Perkins, director of youth programs for My Brother’s Keeper, said the nonprofit’s Youth Leadership Team is comprised of area high school-aged youths interested in civic engagement, which “allows them to be visible in a positive light.”

My Brother’s Keeper, which feeds about 70 people daily and provides social services, was one of nine organizations awarded a local or national CCHD grant at the annual awards luncheon at Baltimore’s St. Francis of Assisi Aug. 23.

The CCHD is an effort by the United States Conference of Catholic Bishops to address poverty by assisting groups working to address the root causes.

“The collection has held steady, which is very important,” said Monsignor William F. Burke, pastor of St. Francis of Assisi, Baltimore, and diocesan director of CCHD.

The grants help to create job opportunities and businesses, Monsignor Burke said, who noted “it’s not a handout, but a way out.”

Baltimore Auxiliary Bishop Denis J. Madden, a longtime supporter of CCHD’s efforts, said to the grant recipients that “all of you are the great workers of the vineyard” who are helping “our brothers and sisters who just need a little bit of help to get started.”

Perkins, from My Brother’s Keeper, said the youth group aims “to help them understand the relationship between the symptoms and actual issues,” noting that the youths learn why it may not be safe to walk down some streets after dark.

In addition, this group is one way the nonprofit is moving from only providing transactional services to “moving to the point where the Irvington community can transform,” Perkins said.

Derek Glenn Jr., 17, of Lower Edmonson who accepted the grant for My Brother’s Keeper, said as a member of the Youth Leadership Team he has “learned a lot about oppression.”

“I will use what I gained and spread it around to my peers,” Glenn said.