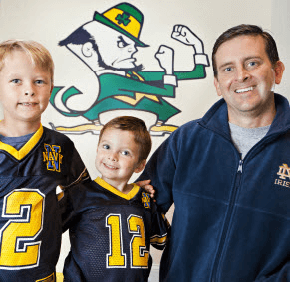 Jim Bolduc has two favorite pieces of college football memorabilia – a Fighting Irish photo montage of its famed 1988 win over the University of Miami, and a football autographed by Navy quarterback and 1963 Heisman Trophy winner Roger Staubach.

As a 1990 University of Notre Dame graduate and a U.S. Naval Academy football season ticket holder, Bolduc, a parishioner of St. Mary in Annapolis, will root for both teams as he watches them play in Ireland Sept. 1 for the Emerald Isle Classic.

About 35,000 Americans are expected to be in the stands of Dublin’s sold-out Aviva Stadium – the largest ever influx of Americans to Ireland for a single event, according to reports. Among them will be Catholics from the Archdiocese of Baltimore who have deep allegiances to Notre Dame or Navy – or, like Bolduc, both.

Taking sides in the Notre Dame-Navy rivalry feels practically patriotic for some, and perhaps for good reason. The match-up is the longest continuous nonconference series in college football, with an annual game every year since 1927, including a previous Dublin-hosted game in 1996.

The schools have an abiding respect for each other. When then all-male Notre Dame lost applicants to the World War II draft, Navy – who had many men to train – established an officer training school at Notre Dame’s South Bend, Ind., campus, keeping Notre Dame financially afloat.

The schools’ history has engendered a robustly sportsmanlike atmosphere at their games, said 1971 Notre Dame graduate and Church of the Resurrection, Ellicott City, parishioner Jim Coolahan – even during Notre Dame’s 43-year winning streak. Navy broke the streak in 2007 and won again in 2009 and 2010.

Ken Goldman, who earned an MBA at Notre Dame in 1976 and tries to attend a few games each year, said the atmosphere of the games is so collegial that “it’s almost like playing football within your family in the backyard on a holiday,” but it’s “still a step above all the other rivalries that Notre Dame experiences.”

Both active members of the Notre Dame Club of Maryland, Goldman and Coolahan are traveling to Ireland for the game together, with their wives Jeanie and Liz, through Anthony Travel, the teams’ official travel manager.

Having the game in Ireland will “allow ND fans to more closely identify with the Irish roots or traditions of the school,” Goldman said.
“Many would say the Notre Dame fans are looking forward to the Guinness beer,” he added with a laugh.
Coolahan expects the game’s atmosphere to be “electric,” he said.

As for Navy fans, there is no team they would rather beat than Notre Dame, besides for Army, which is a given, said Mike Morrell, business manager at St. Mary in Hagerstown and 1971 Naval Academy graduate who plans to attend the game with his son Brett.

Church of the Crucifixion, Glen Burnie, parishioner Dave Papak “bleeds navy blue and gold,” he said.  A 1976 Navy graduate and football player who returned to the team as an assistant coach from 1982 to 1984, Papak has had season tickets since 1985.

In recent years, Notre Dame players have stood with Navy players after the game during the playing of Navy’s alma mater, “Navy Blue and Gold.”

Papak finds that gesture deeply meaningful – “especially in the course of the last 10 years when our players are going to graduate, and in six months after they graduate, they could be Marine Corps lieutenants in the streets of Fallujah in Iraq,” he said.

The teams’ mutual esteem is evident in the design of the game trophy, which was recently commissioned by the Notre Dame Club of Maryland while Notre Dame was still on its winning streak. Instead of a single trophy inscribed with the game score, the trophy has two halves, which are reunited during games and inscribed with each year’s team captains instead of the score.

A former president of the local Notre Dame club and a regional alumni representative, Coolahan was instrumental in the trophy’s commission.

Some Catholics have chosen to frame their trip to the Dublin game with a pilgrimage led by three archdiocesan priests: Father Michael DeAscanis, archdiocesan vocations director and former pastor of St. Agnes in Catonsville and St. William of York in Ten Hills; Father Matthew T. Buening, pastor of St. Paul in Ellicott City; and Father J. Collin Poston, pastor of St. Mary in Hagerstown.
Father DeAscanis emphasized the prayerful nature of the Ireland pilgrimage, but said that the Catholic faith includes celebration, as well.