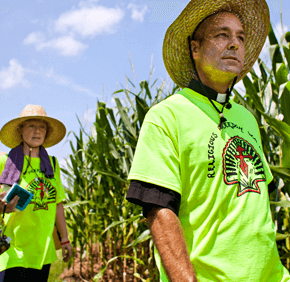 ANTIETAM CREEK – Three days and 30 miles into a 100-mile trek to Baltimore from the tiny Central Maryland town of Hancock, Laura Dudich lost count of her blisters.

“My foot is covered in Band-Aids right now,” said the 17-year-old parishioner of St. Peter, Hancock, pausing briefly July 31 as she pounded the pavement along a farm-lined stretch of highway in Washington County.

“I’m determined not to quit,” Dudich insisted. “I want to go to the end. This is a cause I really want to stand up for.”

Supporting religious freedom was the goal of Dudich’s walk, which began July 29 at St. Peter and attracted 24 other Catholic pilgrims from throughout the area.

Led by a man carrying a flag emblazoned with “An Appeal to Heaven,” the pilgrims walked 13 miles a day – stopping at Catholic parishes and other locations along the way to sleep and refuel. They wore bright neon T-shirts, whose back bore the message, “We’re Walking for YOU!”

The journey will culminate in a 4:30 p.m. Mass celebrated Aug. 5 by Bishop Denis J. Madden at the Basilica of the National Shrine of the Assumption of the Blessed Virgin Mary, Baltimore – America’s first cathedral and an international symbol of religious freedom.

Kimberly Mose, an 18-year-old parishioner of St. Mary, Hagerstown, said the pilgrimage had three goals: penance for the nation, alerting others to threats to religious freedom and winning souls to God.

“It’s a great way to spread our faith as we are taught by our parents,” Mose said. “The church is being forced to provide contraceptives and stuff like that. It’s going against our beliefs and it needs to stop.”

As a passing motorist beeped his horn in support, Mose said she was encouraged by the positive response of the people she met along the journey. As the group proceeds, it is picking up additional walkers who are inspired by the pilgrimage.

“We haven’t had any negative response,” she said, noting that the pilgrims distributed information cards and rosaries. “People are very interested and they want to know what we are doing.”

As walkers took a break July 31 beneath a hot sun, a man whose body was nearly covered in tattoos asked for rosaries. A non-Catholic who said he read the Bible while he was incarcerated, the man bowed his head in prayer as one of the adult pilgrims prayed for him.

“None of them know me,” the man told the Catholic Review, asking not to be identified, “but they prayed for me. It means a lot when someone says they’ll pray for you.”

Bill Webster, a 60-year-old parishioner of St. Peter, said he hopes participating in the pilgrimage dispels apathy about genuine threats to religious liberty.

“I don’t think most Catholics realize the importance of where we are right now and what’s slowly being taken away from us,” he said. “There’s nothing you can do in Washington politically other than vote, but you can get out to walk and it might draw attention and change a heart or a mind – and get people stirred up.”

Webster said change must start at the bottom “with little steps.”

“It’s not going to come from the top,” he said.

“We’re physical and we’re spiritual,” he said. “Walking for religious freedom really compelled me. I want to do something with my whole person – body and soul.”

Father Lombardi said several businesses and supporters donated meals for the walkers. Pilgrims also received pledges for every mile travelled. So far, $3,000 of their $5,000 goal has been raised, with all the money going to the St. Vincent de Paul Society of Baltimore and the Interfaith Service Coalition in Hancock.

CatholicReview.org will have full coverage of the pilgrims’ arrival in Baltimore. Keep checking the website for updates.