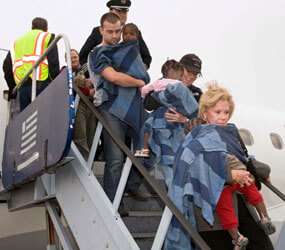 PITTSBURGH – Capping a rescue that mesmerized much of the country following the devastating Jan. 12 earthquake in Haiti, 53 orphans arrived safely at Pittsburgh International Airport Jan. 19.

The children, ranging from infants to age 12, came from an orphanage in the capital city of Port-au-Prince operated for the last two years by two Pittsburgh-area sisters, Ali and Jamie McMutrie of Ben Avon.

That facility, housing 150 children, was badly damaged by the earthquake. The McMutries quickly contacted Pittsburgh relatives, seeking supplies and help with rescuing the children.

On arrival, the children were immediately taken on three buses to Children’s Hospital of Pittsburgh for medical checkups and processing. They were staying with licensed caregivers until their adoptive families could arrive to take them home.

Many of the children had already been in the process of being adopted by U.S. families when the earthquake hit.

The complicated adoption process has been sped up by an emergency ruling by Homeland Security director Janet Napolitano, but the agency and U.S. Citizenship and Immigration Services still must clear the children to leave Pittsburgh with the families.

Rendell and Altmire joined 30 other local aid and medical personnel, including Catholic Charities board president Mark Shepard, on the rescue flight that left Pittsburgh Jan. 18 for Port-au-Prince. The plane also carried 4,000 pounds of medical supplies for Haiti.

Shepard, a member of St. John Neumann Parish in Franklin Park, had been invited on the flight by a UPMC official and “asked if I could assist with the children once they were in the U.S.,” he said.

They spent six hours at the airport while Rendell and other officials went to the U.S. embassy to solve documentation questions delaying the children’s departure.

Once their departure was approved, the children, who had been staying at the embassy since the destruction of their home, arrived in vans to board the huge C-130 transport plane.

The older children were buckled in, while aid personnel held the babies in their laps.

Shepard had high praise for the “two amazing young women who have been taking care of the children” – the McMutrie sisters. In yet another complication, Jamie McMutrie stayed behind when it was learned that one of the orphans had wandered off. Both arrived in Miami Jan. 20 en route to Pittsburgh.

“It was kind of surreal,” Shepard said of his expectation of encountering children who had been traumatized by the earthquake. “I had anticipated they’d be in much worse shape.”

“These kids have been well cared for and are thriving, thanks to their little community in that orphanage,” he said. “It was clear they had a wonderful community relationship there.

“There was a sense of joy as they were brought to the U.S.,” he said. “I hope the process is as smooth as can be for them.”

Catholic Charities is helping in that process. The agency provided the bulk of volunteers and interpreters assisting the children until they can be released to their new families, Shepard said.

Susan Rauscher, head of Catholic Charities in the diocese, saw it as a “blessed opportunity” for the agency to join with others to “collectively provide for the safety and well-being of these precious children and to be a part of this great mission to bring them to Pittsburgh.”

“Catholic Charities staff and more than 50 volunteers and translators welcomed and attended to the children upon their arrival at the airport and provided for their needs throughout their stay at Children’s Hospital,” she said. “The children are beautiful and happy, and were being typical, playful kids which is hard to imagine after all they’ve been through. But that’s what miracles are all about.”

About 90 children from the orphanage are now in the care of the French and Dutch governments, while the others are heading to new families in other countries.