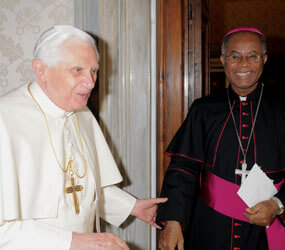 WASHINGTON – Haitian Archbishop Joseph Serge Miot was known as a humble man who was close to the poor in the Archdiocese of Port-au-Prince.

Archbishop Miot, 63, was among tens of thousands of Haitians who died in the Jan. 12 earthquake.

For years he served as president of the Haitian bishops’ justice and peace commission, and he often spoke of the need to help the citizens of the Western Hemisphere’s most-impoverished nation.

“The misery is so great,’’ Archbishop Miot told Catholic News Service in New York in May 1998. “Things have never been as bad as they are now. People who could not make a living in the rural areas have moved to the cities, and they are piling up in the slums.”

In a Jan. 14 e-mail to Catholic News Service, Archbishop Bernardito Auza, papal nuncio to Haiti, said the archbishop “was hurled from the balcony outside his room while he was waiting for another person on their way to a ceremony. The force of the earthquake threw him headfirst off the balcony and he died, it seems, from the impact.”

Because there was no electricity in the city, church officials took Archbishop Miot’s body to the coastal city of St. Marc, said the nuncio. He said he asked that the body be buried immediately, which is not the normal Haitian tradition.

Haitian Holy Cross Father Rodolphe Arty, associate pastor of St. Thomas the Apostle Parish in Naperville, Ill., described Archbishop Miot as “a man of prayer” with a “great devotion to the Blessed Mother.”

Father Arty, who said the archbishop taught him philosophy at the major seminary in Port-au-Prince, told CNS by telephone that his friend would welcome anyone into his home.

He was “humble” and “very close to poor people in Port-au-Prince,” said Father Arty, a former provincial of the Holy Cross Fathers in Haiti. The priest, who has been at the Illinois parish for three months, also said he crossed paths with the archbishop at youth and pastoral ministries meetings.

“He was such a wonderful man,” said Liz McDermott of Le Claire, Iowa. “We lost a wonderful soul, truly a man of God. It’s just heartbreaking.”

As a volunteer with ServeHAITI, she has made numerous mission trips to the medical clinic the organization operates in Grand Bois, about 60 miles from Port-au-Prince. Archbishop Miot even attended a Haitian fundraiser at Our Lady of the River Parish in Le Claire in October 2008 and, while he was there, he concelebrated the funeral of the parish’s pastor, Monsignor Leo Feeney.

As a priest, he taught and served as rector at the seminary in Port-au-Prince until he became rector of the newly established University of Notre Dame of Haiti in 1996.

In July 1997, Pope John Paul II named him coadjutor archbishop of Port-au-Prince in an effort to resolve a difficult situation that arose after a failed presidential coup in 1991. Many city residents held Port-au-Prince Archbishop Francois-Wolff Ligonde responsible for encouraging the coup, and crowds burned his residence as well as the headquarters of the Haitian bishops’ conference, a historic church that formerly served as the cathedral and the Vatican nunciature.

Archbishop Miot was administratively in charge of the archdiocese as coadjutor; he succeeded as archbishop March 1, 2008.

In 2005, he suspended a popular imprisoned priest, Father Gerard Jean-Juste, for defying the hierarchy’s orders and presenting his credentials to be a presidential candidate in the November elections. The priest later traveled to the United States, and in May 2009 he died of complications from a stroke and a lung problem in a Miami hospital.