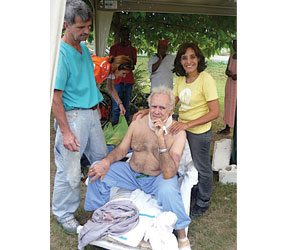 The relief effort in Haiti includes a priest and nun, both medical doctors, with ties to Baltimore.

Passionist Father Richard “Rick” Frechette, who served at St. Joseph Passionist Monastery in Irvington in the early 1980s, made several national news shows after the Jan. 12 earthquake, focusing on his work in Haiti and a vigil at his mother’s deathbed in Connecticut.

Religious Sister of Mercy Karen Schneider, an assistant professor of pediatrics at Johns Hopkins University, was scheduled to lead a team of seven pediatric residents to Port-au-Prince for a two-week outreach the morning of Jan. 13.

After a delay of several days, her team found its way into Haiti, where it was providing emergency services.

Father Frechette, meanwhile, was with his mother, Gerri, in Connecticut when the earthquake hit.

After a plane ride from New York to Santo Domingo, Dominican Republic, and a lift in a helicopter belonging to the president of the Dominican Republic, Father Frechette arrived in Port-au-Prince Jan. 14 to a series of what he called “sadnesses” – including 18 funerals that first day.

In an e-mail, Father Frechette said that he hastily reversed that route Jan. 18 to be with his mother back in Connecticut, and that she died later that same day. He will return to Haiti after her Jan. 21 funeral.

Responding to the need in Haiti, Father Frechette earned his medical degree
in 1998.

A doctor of osteopathic medicine, he oversees St. Damien Chateaublond pediatric hospital; the Father Wasson Center, where educational and rehabilitative services are provided at the site of the former pediatric hospital; and St. Helene orphanage, which housed more than 350 children.

Father Frechette made many friends during his days in Baltimore, and has inspired several to volunteer in Haiti. One of them, Ed Perry, joined him in Haiti Dec. 27 and will remain to help.

Perry, 52, is a graduate of Mount St. Joseph High School, where his mother, Mary, was a secretary for 17 years.

“Ed’s a window washer, and this is his slack time,” she said. “He usually goes down to Haiti every year, after Christmas, to help Father Rick. Ed’s a kind person, with a big heart. I spoke briefly to him Friday (Jan. 15) evening.”

She too, was inspired by Father Rick to do volunteer work in Haiti, in 2007

Sister Karen, meanwhile, scrambled to get her team into the country. They had initially planned to spend five days in Dumas, three in Port-au-Prince and complete their stay teaching at Hospital Sacre Couer in Milot, in the north of Haiti.

Instead, they headed directly to Milot, where patients are being brought to them.

Sister Karen, who teaches an elective in tropical medicine, has made approximately 20 trips to Haiti.

“Most of my family and friends are glad I’m not there,” she said before her most recent departure, “but I wish I was in Haiti.”