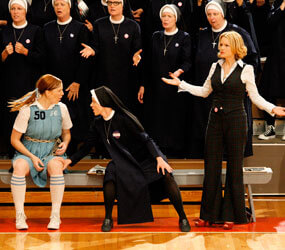 WASHINGTON – Imagine being able to write a movie about something that you were a part of, even if it was just a little bit.

That’s Tim Chambers’ story, and it will be brought to the big screen this fall in “The Mighty Macs,” which he wrote, directed and produced.

“I really had a personal experience with the story itself,” Chambers told Catholic News Service in a June 5 telephone interview.

“I grew up in Philadelphia. I’m one of 12 kids, eight brothers, four sisters, It’s important because when I was a kid I vividly remember the Mighty Macs. Their campus was about 25 minutes from my hometown. When their gym burned down, they practiced at my parish,” St. Anastasia in Newtown Square, Chambers said.

He was a self-styled “gym rat” in those days. It happens naturally, Chambers said, “when you grow up as one of 12 kids and you have a CYO program that’s very strong.”

Chambers had already dabbled in movie production, having produced the 2004 film “Miracle,” about the 1980 U.S. Olympic men’s hockey team. After he was featured in a profile of the movie and its behind-the-camera team in the Philadelphia Inquirer, someone from Immaculata contacted him about the possibility of making a movie about the school’s legendary women’s basketball team.

He remembers the request: “Can you take a look at the story of the Mighty Macs and find out if it’s film-worthy?” Chambers did. “As a writer, I’m looking for a number of things. All of the inspiring sports film genres use sports as a metaphor for some other lesson of life or some other greater cause.” One example he gave was “Remember the Titans,” which is on its surface is about high school football, but on a deeper level is about race relations.

“For me I always felt the story of the Mighty Macs and of Cathy Rush, the head coach, was a story of equality, of dreams,” Chambers told CNS. “With her championship she united the campus and changed a generation of young women, all of whom went on to very successful careers.”

Chambers then reeled off the names of several players from the storied 1972 team and what they did once they left Immaculata. Their resumes include coaching at the collegiate level, including their own NCAA championship teams, and in the WNBA, which nobody would have envisioned 40 years ago.

He said he knew he was on the right track when he received an opportunity to sell the script – but “chose not to because they weren’t going to let me direct it. I put my producer hat on and used my economics degree from Penn. I touched on my Catholic friends from Philadelphia (to) see if they would support it,” he recalled. “We passed the basket, as they say here in Philly.”

Chambers was taught by the Immaculata Sisters, who run Immaculata College, during his grade and high school years.

“I felt like this was the opportunity for me to make my directorial debut,” he said. “I think of the layers and the nuances – not only of the plot of the story, but the nuances of our faith and how relevant it was to that team, that campus, those people, and how it is lived today.”

As a practicing Catholic, he noted, his faith has been his “bedrock” and given him confidence. It’s “the foundation of what I’ve tried to practice every day. Some days are better than others … but I turn it over” to God, he added. “That’s my philosophy.”

In assembling the script, Chambers got to meet not only some of the former players, but some of his former teachers. “The excitement and euphoria that surrounded the school at the time was incredible. I was reconnected with some of the sisters that taught me at the grade school. In that respect, it was a lot of fun,” he said.

Although “The Mighty Macs” isn’t scheduled to hit multiplexes until Oct. 21, it has won best-picture awards at three film festivals. Chambers cited the Family Film Festival in Los Angeles, where it won both the audience award and best-picture prize, and the John Paul II International Film Festival in Miami.