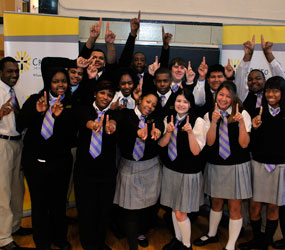 Mariah Gangapersad, Ruben Torres and Chris Ellis had never set foot on a college campus until they were freshmen at Cristo Rey Jesuit High School in Baltimore. Three years later, they are close to actually attending one.

All three 17-year-olds are part of Cristo Rey’s first senior class, which The Catholic Review is chronicling during the 2010-11 academic year.

Cristo Rey’s mission is preparing at-risk young people from Baltimore City for college. While potential students were asked if they wanted to attend college, that wasn’t on Torres’ mind four years ago.

“I wasn’t thinking too much about the future,” said Torres, who now aspires to be an engineer or lawyer.

“I was amazed at everything I saw,” Torres said.

Ellis added: “I got a scope for what college life really was. I kind of got an idea for what I had to do to prepare myself to be a good college student.”

Gangapersad, who wants to pursue a career in medicine, was floored by the available technology.

“When you look at colleges on TV, you don’t really think of that stuff,” she said. “But, when you see it up close, you realize it’s an opportunity you don’t want to miss.”

The students took college counseling and test preparation classes during their junior year. In addition, Lucy Neale Duke, the school’s director of college counseling, said her office uses an Internet-based tool to aide students in their college search.

“We want students to feel like they can come and talk to us,” Neale Duke said. “Anything we can do to make them more comfortable with us, we try to do.”

Toward the end of junior year, students started to think about applying to specific schools. Neale Duke said Cristo Rey students are required to apply to at least one Maryland college.

Gangapersad and Torres each said they struggled with capturing just the right thought for application essays. The college counseling staff made the process smoother, Gangapersad said.

Ellis, a self-described “a late bloomer in maturing,” became more reflective after a conversation with Neale Duke.

“I understood that I needed to grow up and stop kidding around because life is just that – life,” Ellis said. “It’s not a game. You can’t throw your life away and expect to not suffer the consequences. It was actually kind of scary. Growing up, it was always in the back of my mind, but at a young age, I was kind of slack with it.

“It was a wake-up call for what I had to do to prepare myself for my future.”

King said such maturation is inspiring.

“I think people underestimate the growth that goes on between the summer after junior year and the summer before college,” she said. “I’m having interactions with juniors now, trying to see which juniors will be a Chris Ellis and kick it into gear.”

Close to a dream

“The vast majority of students have applied to colleges at this point,” Neale Duke said.

Once Gangapersad, Torres and Ellis sent their applications, they took deep breaths. By early December, envelopes began to arrive at their homes.

“I knew it was an acceptance letter because of the big envelope,” said Gangapersad, who has been accepted to Ohio Wesleyan University and Canisius College.

“I got accepted into my first college,” he said. “I was nervous at first and then I got excited.”

Ellis was in Atlanta with his mother, Cornelia, when he called an aunt to check the mail.

She said a letter had arrived from Mount St. Mary’s, that he had been declined. Ellis dropped the phone. His mother picked it up and asked the aunt to stop joking and tell the truth. Ellis had indeed been accepted to the Mount – and offered grants as well.

Ellis jumped in the air before looking at his mother, who started crying and went outside to compose herself. Her son struggled to do the same.

“I think it was just the smile on her face,” Ellis said. “I just want to please her.”