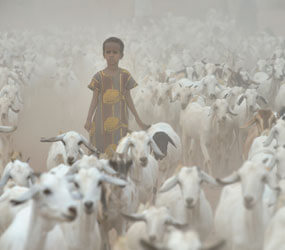 DADAAB, Kenya – It took 32 days for Fatima Mohammed to make it from her drought-racked farm in Somalia to the relative safety of a sprawling refugee settlement in northeastern Kenya. There were days, she recalled, when her children were so thirsty that they could not walk and the men in her family would ferry them ahead, returning to carry two more children in their arms.

Fatima Mohammed told Catholic News Service that her family had lived through drought before, but that support from aid agencies helped them survive until the rains returned.

“This time, al-Shabaab won’t let them in,” she said, referring to the Islamist group that controls portions of Somalia. “So when our animals started dying, our only choice was to stay and die ourselves, or else start walking for Kenya.”

They trekked across the desolate stretch of African bush, all 11 members of the family, often walking with other families in large groups to dissuade attacks from wild animals and bandits. They arrived in Dadaab at the end of May.

As the world has watched, in recent weeks the three camps that make up the Dadaab refugee complex have swollen to barely manageable proportions. Originally designed for 90,000 refugees when it opened two decades ago, the complex today host upward of 390,000 refugees, plus at least 60,000 people who have fled Somalia but are not yet officially registered with camp managers. United Nations officials say 1,300 newcomers arrive every day.

The rapid growth – and the dramatic media attention – has brought an influx of new agencies looking for ways to augment the work of the almost two dozen nongovernmental organizations already here. Among the newcomers is Catholic Relief Services, which sent an assessment team to Dadaab in July.

CRS sponsors programs in other parts of Kenya but it doesn’t work in Dadaab. The agency’s executive vice president for overseas operations, Sean Callahan, said that while CRS is looking at ways to support the work of others, it’s unlikely to get directly involved.

“We want to come here and assist, but we also recognize this is one of those intractable situations,” Callahan said. “If you get into the camps, you may never get out. Our priority is helping people become self-sustainable, and this doesn’t look like one of those situations. So we’re listening and trying to figure out how best we can contribute.”

The need for assistance is clear, however.

“Most people here seem to have no strategy to go back, so the Kenyan government is in tight bind. The international community has to step up and help them,” Callahan said.

According to the camp manager, Anne Wangari, Dadaab’s long-term residents have helped fill the gaps that emerged with the new influx, despite cultural differences.

“Refugees have been coming here since time immemorial, but the new refugees are different than the old refugees, who have been living under Kenyan law for 20 years. They know the usefulness of queuing and a bit of patience. But queuing and courtesy are foreign to the new arrivals, who want to go to the food distributions with a weapon,” said Wangari, a former Sister of Loretto who now works for the ACT Alliance, a network of Protestant aid agencies.

“When the newcomers arrive hungry, the refugee community has gone out of its way to receive them and give them supplies, food and clothes,” she explained. “This has happened in all the camps. When the United Nations stopped giving biscuits, the old refugees went to the shops and bought biscuits. They let the new arrivals settle on their small plots. The sense of sharing among the Somalis, and among the Muslims, is great.”

Callahan said he would prefer to respond at the source of the refugee flow, within Somalia, but security concerns make that impossible.

“We’ve been in and out of Somalia over the years. We consult with Bishop (Giorgio) Bertin (apostolic administrator of Mogadishu) on how we should act and what we should do, and through him we are funding some projects addressing hunger there. He has advised us to be very cautious about going into Somalia, and currently, given the U.S. position on it, we can’t,” he said.

The U.S. government designates the Islamist group al-Shabaab, which controls a large portion of Somalia, to be a terrorist group, and thus prohibits U.S. organizations from working in areas it controls.

After speaking with refugees here, Callahan said he was impressed “at the lengths to which people have gone to seek hope and opportunity for their children. They have risked so much to come here, to a situation that, frankly, isn’t that wonderful. What does that say about where they came from, about the failure of the international community to provide for the safety of the citizens of the world in certain countries?”

Callahan admitted that the idea of intervening in Somalia is “huge and complicated,” but must be addressed.