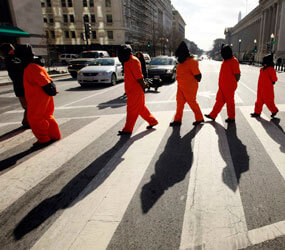 WASHINGTON – Undertaking 11 days of fasting, prayer, meditation and public action, a group of Catholic and other activists has renewed its push for the immediate closing of the military-run prison at Guantanamo Bay, Cuba.

Members of Witness Against Torture, established in 2005 with the goal of closing the prison housing suspected terrorists, began their fast Jan. 11 at the White House. The group marked the eighth anniversary of the prison’s opening with a demonstration and a procession through downtown Washington.

The group contends that the men cleared by the government of any wrongdoing should be released and that those suspected of terror-related activities should face trial rather than continue to be held indefinitely without charges.

During a demonstration at Lafayette Park near the White House, several group members expressed disappointment that President Barack Obama has not adhered to his pledge to close the prison within one year of taking office.

Matt Daloisio, a member of the New York Catholic Worker and an organizer of the group, told Catholic News Service that the sense of hope he felt a year ago when Obama signed an executive order to close the prison within a year has diminished.

“I don’t want to call it despair, but there’s a profound disappointment,” Daloisio said.

Obama in November backed away from the one-year deadline he set for closing the prison in an executive order signed two days after his inauguration. His order to ban the use of torture remains in place.

About 200 people gathered for the kickoff of an 11-day series of events in Washington to raise awareness about the Guantanamo situation. About 40 people were dressed in orange jumpsuits – similar to those worn by the 198 detainees remaining in the prison – and processed under the direction of a member who portrayed a soldier in camouflage. Other demonstrators carried signs urging the president to uphold his pledge.

The White House did not respond immediately to a request for comment.

Daloisio said about 100 people nationwide were participating in the liquids-only fast while others planned to join in prayer and reflection through Jan. 22, the one-year anniversary of Obama’s executive order.

“But at the end of the day it’s people’s lives and we’re talking about the integrity of America. It has said it doesn’t want to be a country that tortures people and holds people indefinitely without charges. Yet it’s those things that are continuing to be trade,” he said.

Other participants said they were motivated by their faith to join the effort.

Bob Cooke, a member of Pax Christ USA’s Metro DC-Baltimore chapter said he was concerned that most Americans think that the president’s order meant the prison had been closed.

“My main concern is that we as a people have not repented from torturing people in Guantanamo and holding people indefinitely,” Cooke said. “Most of the people being held in Guantanamo have been found innocent, have been cleared for release, but there’s no place to put them.”

During a press conference at the National Press Club after the demonstration, the group was joined by representatives of the Center for Constitutional Rights and Human Rights Watch in urging Obama to move rapidly to close the prison.

“Guantanamo should close for many reasons: national security, respect for law and human rights and for restoring the dignity of the men who have lost so much over eight years,” said Pardiss Kebriaei, a Center for Constitutional Rights attorney who represents several detainees.

She said more than 100 detainees remaining at Guantanamo have been cleared by the government for release because they have been found not to have ties to terrorism, but they continue to be detained.

Vincent Warren, the center’s executive director, raised concern that the publicity surrounding the attempted Christmas Day bombing of an airliner near Detroit has fueled misguided fear that the cleared men are in fact involved in terrorism and that they will continue to be held indefinitely.