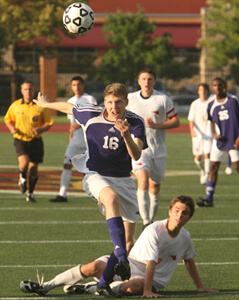 “He’s going to be missed,” the varsity coach of the Irvington high school said. “He’s going to do something great with his life when he gets older.”

Arnold has a weighted grade point average of 4.6 and hopes to attend Princeton, Cornell or the Naval Academy.

The forward/midfielder started playing on the varsity as a sophomore because St. Martin was impressed with his “relentless work-rate.”

He was the team’s leading scorer a year ago with 13 goals and six assists. Seven of those goals came in the final six games. This season, Arnold already had nine goals by late September.

“I can’t even express how grateful I am that I came here and was able to be part of this program,” Arnold said. “It’s meant everything to me.”

Arnold was home-schooled before Mount St. Joseph and developed academic independence and drive.

“I’ve always gone after the things I thought would help me in what I like to do,” Arnold said.

The senior played lacrosse for Mount St. Joseph during his freshman and sophomore years. He has an astounding 2-handicap on the Gaels’ golf team. Outside of school, he was also on the junior national volleyball team.

“He’s probably the best all-around athlete in the school,” St. Martin said in his office in the basement of the school’s gymnasium.

That’s a major claim to make in a school loaded with many talented sports stars.