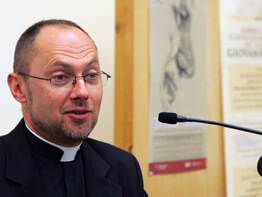 ROME – In connection with the sainthood cause of Pope John Paul II, a graphologist and a psychiatrist were called as expert witnesses in the investigation into the presumed healing of a nun suffering from Parkinson’s disease.

Monsignor Slawomir Oder, the postulator of Pope John Paul’s cause, said the French diocese where the nun lives concluded its investigation March 23 and would hand all its documentation to the Congregation for Saints’ Causes in early April.

Monsignor Oder spoke to reporters March 27 about the status of the cause and plans for the formal conclusion of the Rome diocesan phase of the process April 2, the second anniversary of Pope John Paul’s death.

The postulator said the French nun, whose identity has not been revealed, would participate in the April 2 prayer service and attend the memorial Mass Pope Benedict XVI will celebrate in St. Peter’s Basilica in the evening.

He said the French investigation into the nun’s healing was conducted “with maximum seriousness … and a bit of the French critical attitude, which is quite useful for this kind of procedure.”

The proposal to recognize that the nun was healed spontaneously and completely of Parkinson’s disease – the same disease that afflicted Pope John Paul – was strengthened by the critical approach the French took, he said.

In addition to interviewing the nun, her superiors and her physicians, he said, the French diocese also had her undergo a psychiatric evaluation and had a graphologist examine samples of things she had written by hand immediately before and after the alleged healing June 2, 2005.

One of the indicators physicians use to determine the progression of Parkinson’s disease, he said, is the deterioration of a patient’s handwriting.
“I had the opportunity to see these documents and it was amazing. It was amazing, for example, to see the last document written before that event that changed the sister’s life,” he said.

The last document was “a kind of plea” for help, he said.

She simply wrote, “John Paul II” in French, but it “is practically illegible. Illegible,” he said.

The second document is the account she wrote the next morning about what had happened, he said. “It is similar to the handwriting she had before the appearance of the first symptoms of Parkinson’s disease,” he said.

The psychiatric evaluation “was one of the most difficult aspects of this procedure,” Monsignor Oder said, and is something not usually requested as part of the procedure to verify a miracle.

“The sister was fantastic in cooperating, even though she said it was a very difficult moment for her,” he said, but the diocese wanted to be sure that the improvement in her condition could not be attributed to her mental state.

The April 2 conclusion of the Rome diocesan portion of Pope John Paul’s cause does not mean the process is nearing completion, Monsignor Oder said.

The Rome Diocese will give the Vatican the testimony collected from more than 120 people who knew the pope in Poland and in Rome, a theological evaluation of his published works that did not involve an exercise of his papal ministry and a review of unpublished written materials, including letters and retreat talks, Monsignor Oder said.

The postulator still has to compile the multi-volume “positio,” or position paper, outlining how Pope John Paul heroically lived the Christian virtues.

While Pope Benedict set aside the normal five-year waiting period before the canonization process could begin, even the diocesan phase and the investigation of a possible miracle were completed in almost record time, said Monsignor Mauro Parmeggiani, secretary-general of the Vicariate of Rome.

Monsignor Oder added, “The rapidity does not mean a lack of seriousness.”
Monsignor Parmeggiani told reporters that with the exception of “the dispensation of the waiting period for the opening of the process, in this procedure no other dispensation was given. The entire procedure has been and is taking place with strict observance of all canonical norms.”

Monsignor Oder said that on a personal level he shared the hope of many people that Pope John Paul would soon be declared a saint, “but the church has its traditions and juridical processes” and he expects those to continue normally.