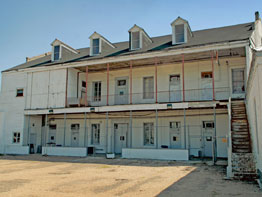 WASHINGTON – Two Catholic landmarks in New Orleans have been given much-needed cash to reinforce the structures and ensure that future generations have the opportunity to experience spiritual mysteries that might connect them to the past.

The aging structures – both threatened with extinction – are among five celebrated properties in the hurricane-ravaged Louisiana city to receive restoration grant money from American Express and the National Trust for Historic Preservation.

St. Augustine Catholic Church – which had been given a reprieve from closure in 2006 – received $75,000 for repairs to its parish hall’s sealtab-shingle roof, and the St. Alphonsus Art & Cultural Center was given $80,000 for the restoration of the 1891 front portico of the church building.

The decisive factors included historical, architectural and cultural significance, demonstrated community support for the sites, a role as community gathering spaces, damage from Hurricane Katrina, and a specified group’s ability to complete a conservation project within one year, Mr. McClimon said.

“To think the National Trust and American Express see the value of putting their money in this, it says something about the significance of the building,” Michael M. Davis, a board member of the St. Alphonsus Art & Cultural Center, told Catholic News Service. “It would be difficult for us to survive without grants like this.”

The former Catholic house of worship – which had been the girlhood parish of renowned author Anne Rice – closed in 1979, sat empty and slowly deteriorated until a group of New Orleans residents convinced the Archdiocese of New Orleans to lease them the property in 1991 and transformed it into an arts and cultural center.

Consecrated in 1858, St. Alphonsus was built by Irish immigrants. It boasts one of the largest collections of frescos crafted by Italian artist Domenico Canova in the world, contains stained-glass windows from Germany installed in 1888, and “from an artistic point of view, the building is priceless,” Mr. Davis said.

Through endless fundraising and restoration, the group has been able to open the building for receptions, art exhibits, concerts, educational programs and meetings, he said.

When St. Augustine faced closure in 2006, the parishioners pleaded for a reprieve from the Archdiocese of New Orleans, which allowed the church to stay open on the condition that certain benchmarks were met within 18 months, said Sarah Comiskey, a spokeswoman for the archdiocese.

Those conditions included restoration of the church campus buildings, which is why the preservation grant money is so welcome, Ms. Comiskey said.

“They’ve been working very hard at the parish to update and restore their buildings,” she said. “They’ve just finished the rectory. They are getting their buildings up to par, and they are working on their physical plant. They have also opened a food pantry and other social services operations, work that will be conducted in that parish hall, to help the hungry.”

St. Augustine’s closure reprieve is still under review by the archdiocese, but “we are giving this parish support to help them succeed,” Ms. Comiskey said.

An advisory committee comprised of local business leaders, preservation experts and philanthropists from many sectors across New Orleans helped guide American Express and the National Trust for Historic Preservation through the selection process and helped them review each site’s story, background and monetary needs, along with the public’s stories about the nine historic sites considered for the $400,000 in preservation grants, McClimon said.

The five sites that actually received funding were selected in April, he said.

“The stories that people have submitted to the Partners in Preservation Web site emphasize the important role many of these historic places have played in the everyday lives of New Orleans residents – as gathering places and as focal points of community life,” said Richard Moe, president of the National Trust for Historic Preservation.

“Ever since Katrina, the National Trust has been working to restore and revitalize the historic neighborhoods of New Orleans,” he said. “We believe that American Express’ Partners in Preservation program is yet another step in the direction of revitalizing New Orleans and helping people return to their homes and communities.”