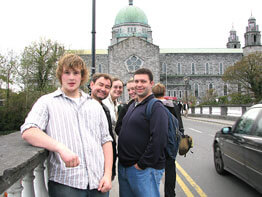 Katie Schmidt will remember the phone call she received from Dr. David Rehm for the rest of her life.

Dr. Rehm, vice president for academic affairs at Mount St. Mary’s University, Emmitsburg, called to ask Ms. Schmidt if she would consider resuming the facilitation of a study abroad program for 35 Mount students whose professor died while in Ireland.

“I don’t think I’ve ever felt more honored and excited,” said the political science graduate about the opportunity to carry on three, semester-long courses with fellow alumnus and close friend Jake Foster. The pair graduated from the Mount in spring 2007.

“It’s a pleasure to go to a country I love, for a school I love on behalf of a professor I loved. I couldn’t ask for a better way to pay tribute to Doc,” said Ms. Schmidt.

“Doc” was the political science faculty member Dr. Emilio Rodriguez who had led the students to Dublin Sept. 20 for the fall semester. After cancelling class one day, then not being seen the following day, the 56-year-old Dr. Rodriguez was discovered dead in his apartment after a worried student asked to go in.

It’s not entirely clear how the professor died, said Dr. Rehm, but “there’s a strong belief he had a heart attack.”

His death came as a shock to the Mount’s close-knit community where he was a beloved, passionate teacher who won the hearts of many. He found the curiosity and energy of students to be “invigorating,” he once said.

“The death of Emilio is a profound loss for the Mount,” said colleague Michael Towle. “He was so full of life; it’s hard to believe he’s gone. We are devastated. He was a wonderful teacher; a fabulous colleague and a man of great generosity.”

Ms. Schmidt, 22, working in Los Angeles at the time on a service project for the Vincentians, asked for a six-week sabbatical and flew overseas Nov. 15 with Mr. Foster, 23, from Collingswood, New Jersey. He had recently obtained a new job and asked to delay the start of it until Jan 1.

The facilitating duo will return to the states Dec. 19 with the other students but in the meantime, finish what Dr. Rodriguez began in the Dublin Business School-affiliated program.

In an email to The Catholic Review, Mr. Foster wrote “The Mount’s response to such a difficult situation shows the type of relationship they develop with students. The university is making every stride they can to help the community deal with the loss of such a beloved faculty member, and to ensure that the students are still getting the right experience of studying abroad.”

Mount students attend class four days a week and are encouraged to travel on weekends to experience Ireland’s culture and people.

“We want them to be in the classroom a bit less so they can take the greatest advantage of their foreign experience,” said Dr. Rehm. He is in daily contact by e-mail with the substitutes. “From what we hear from them everything is going very well. The plan we put in place is coming together. They are being as creative as possible to get through the relevant materials for students to take finals.” Exams are graded by faculty at the Mount.
Ms. Schmidt of Yorktown, Va., wrote in an e-mail, “Serving the Mount in this way has given me the chance to give back to the institution that has given me so much. Helping finish Dr. Rodriguez’s classes is the best way I can honor his memory and the impact he had on my life … I truly see my time here as part of my vocation and another avenue in which God has called me to serve.”

Dr. Rodriguez had been on the faculty at the Mount since 1990 and his wife Amelia Rodriguez is the Mount’s registrar. The couple has a son John Paul, a 2006 Mount graduate, and a second lieutenant in the U.S Army.