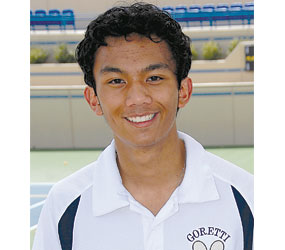 How committed is Maxlorenzo Agbayani to St. Maria Goretti High School in Hagerstown?

The Gaels’ No. 1 tennis player is a resident of Martinsburg, W.Va., meaning that he faces a 30-minute commute to and from school.

“It’s a Catholic high school, and I’m Catholic,” said Agbayani, a junior. “I like it up here. It’s smaller, and I know everyone. It’s a good place to be.”

St. Maria Goretti and strong family influences mean that Agbayani will most likely be going places next year.

He carries a 4.73 cumulative grade point average, on a 4.9 scale. His father is a physician, Agbayani is taking advanced placement courses in biology and calculus, and Columbia University in New York City heads his list of potential colleges.

“Hopefully,” Agbayani said, “I’ll study pre-med in college, and go to medical school from there.”

At St. Maria Goretti, he’s a member of the Varsity Club and the International Club, a natural for Agbayani, whose parents were born in the Philippines.

“We focus on different international issues and themes,” Agbayani said. “We had a German party during Octoberfest, but it’s not all light, we did fundraising for Haiti after the earthquake.”

Agbayani had planned to go the Caribbean nation this coming summer, but instead will perform mission work in the United States.

The No. 3 singles player for the Gaels as a freshman and sophomore, Agbayani has grown to 6-foot-1, growth that has him targeting honors in the Apple Valley League.

“Every coach enjoys having a player like Max,” said Al McGarity, the tennis coach at St. Maria Goretti. “He’s a team leader, good listener and quick learner. His work ethic is a good example for other players, especially the freshmen who look up to him. Winning and losing, he exhibits humility and honor.”