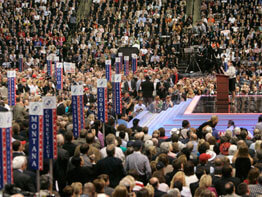 WASHINGTON – Upholding its long-standing view that life begins at conception, the Republican Party decried the practice of abortion and repeated its call for a human life amendment to the U.S. Constitution in its 2008 political platform.

Adopted Sept. 1 at the start of the GOP’s national convention in St. Paul, Minn., the platform affirms that “the unborn child has a fundamental individual right to life which cannot be infringed.” It echoes language in the party’s 2004 platform.

The abortion plank drew praise from several pro-life organizations, including a spokeswoman for the U.S. Conference of Catholic Bishops.

“According to their 2008 platform, the Republican Party stands courageously for the protection of innocent life from its earliest stages onward, both in the womb and in the lab, laying the necessary foundation for promoting all other basic human rights,” said Deirdre McQuade, assistant director for policy and communications in the USCCB’s Office of Pro-Life Activities.

She praised the party for opposing the “status quo of abortion law” under the U.S. Supreme Court’s Roe v. Wade decision.

The National Right to Life Committee called the plank the “strongest and most explicit support of life ever expressed by a major political party.”

The plank reads: “Faithful to the first guarantee of the Declaration of Independence, we assert the inherent dignity and sanctity of all human life and affirm that the unborn child has a fundamental individual right to life which cannot be infringed. We support a human life amendment to the Constitution, and we endorse legislation to make clear that the Fourteenth Amendment’s protections apply to unborn children. We oppose using public revenues to promote or perform abortion and will not fund organizations which advocate it. We support the appointment of judges who respect traditional family values and the sanctity and dignity of innocent human life.”

The platform goes on to note what it calls progress, including the Supreme Court upholding a ban on partial-birth abortion, and the passage of the Born Alive Infant Protection Act.

Meanwhile, its only reference to aiding women who are pregnant says: “We all have a moral obligation to assist, not penalize, women struggling with the challenges of an unplanned pregnancy. … Every effort should be made to work with women considering abortion to enable and empower them to choose life. We salute those who provide them with alternatives including pregnancy care centers and we take pride in the tremendous increase in adoptions that has followed Republican legislative initiatives.”

In a separate section on health care, the platform supports the conscience rights of health care workers –doctors, nurses and pharmacists – by allowing them to opt out of performing, providing or referring health care services which they morally oppose.

Noticeably missing from the platform’s final text was a section inviting “all persons of good will, whether across the political aisle or within our party, to work together to reduce the incidence of abortion.”

The statement had appeared in an earlier draft and had buoyed advocates of a “common-ground” approach in politics to reduce the number of abortions.

The advocates said they were hopeful the final document would indicate a willingness by Republicans to move closer to the Democratic Party’s abortion plank that called for reducing abortion by supporting prenatal services, child health care, education, income support and adoption.

In a Sept. 3 teleconference organized by Catholics United, Catholics in Alliance for the Common Good and Sojourners, an evangelical social justice community, speakers asked Republican leaders to restore the language that had been dropped.

“Americans are tired of the acrimony about abortion,” said Chris Korzen, director of Catholics United.

Alexia Kelley, director of Catholics in Alliance, cited a study released by her organization the previous week showing links between socioeconomic factors and rates of abortion.

The study by Joseph Wright, visiting political science fellow at the University of Notre Dame in Indiana, and Michael Bailey, assistant professor of American government at Georgetown University in Washington, found that improving poor people’s economic situations can reduce abortion rates by 20 percent to 30 percent.

Speaking at the teleconference, Wright said factors such as increased funding for the Women, Infants and Children nutrition program and low unemployment among men contribute dramatically to lowering rates of abortion. He said strategies aimed at reducing abortions through socioeconomic means might logically have a more substantial effect than making abortion illegal in some states.

He also noted that if Roe v. Wade were overturned, laws in 25 states would allow abortion to remain legal. Those states where abortion would become illegal are less densely populated, limiting the impact such a court decision would have, he said.

Kelley and Korzen were among those in August lauding the Democratic National Committee for including language in its platform that they said was an effort to reach common ground. They also criticized the Democratic platform’s unequivocal support for Roe v. Wade.

Contributing to this story were Patricia Zapor and Dennis Sadowski.