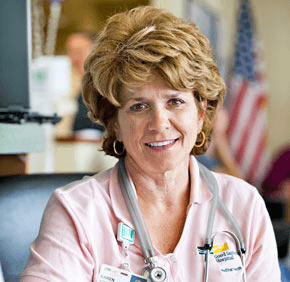 A community outreach nurse, Karen Kansler practices what she preaches – she exercises regularly, eats nutritious food and tries to manage her stress.

“I work really hard to stay healthy,” she said.

Nonetheless, she still had a heart attack.

Now she wants to make sure women know the warning signs, which are different than those for men, said Kansler, 57, who works for MedStar Good Samaritan Hospital in Baltimore and is a parishioner of St. Isaac Jogues in Carney.

At first, she thought she could manage them, as she had before, by staying calm and drinking warm water. She went to work and sat at her desk, trying to focus on low-stress tasks while her heart rate escalated.

Colleague Deborah Bena arrived, told Kansler she looked terrible, took her heart rate – 168 beats per minute – and insisted she go to the emergency room. Kansler refused a wheelchair, walking with Bena to the opposite side of the hospital. By the time she got there, she was weak, nauseous and suffering from significant pressure in her chest.

The doctor on duty confirmed her fear: This health-conscious nurse was having a heart attack.

“This was devastating to me,” Kansler said.

The emergency room team quickly responded to her condition, and within 10 minutes her heart rate lowered. She spent the night in the hospital for observation. Doctors checked her arteries and determined it wasn’t her heart’s “plumbing” – as Kansler puts it – that malfunctioned and caused arrhythmia, but rather its “electrical system,” which she calls its “natural pacemaker.”

A few weeks later, Kansler underwent a surgical ablation, where her heart’s compromised area was located, cauterized and eliminated. After a short time, she was back to her normal routine, although she’s still “shocked” it happened at all, she said.

According to the American Heart Association, heart disease is the leading cause of death among U.S. women. Five times as many women die from heart attacks than breast cancer.

Kansler shares her experience when she teaches health workshops to community groups and in workplaces, and encourages women not to ignore heart disease’s warning signs, such as frequent heartburn, burping and indigestion, heart palpitations and continued fatigue.

“Women and heart disease is so different than men and heart disease, and being 57 years old, I am at the prime age of heart disease,” she said. “It’s not the elephant sitting on the chest with women. It’s just these little, tiny pervasive nuisances that we think sometimes that, ‘Oh, it’s just heartburn, it will go away, I shouldn’t have had that spaghetti last night.’ ”

The experience “enriches what (Kansler) can give to people. It’s going to be another depth to the education she can share,” said Bena, the colleague who took her to the emergency room. “I think that always enriches that for people who are listening.”

A parishioner of the Shrine of St. Alphonsus in Baltimore, Bena, 59, had her own heart checked because of Kansler’s experience.

Kansler recommends all women to do some sort of cardiovascular exercise most days of the week for 30 to 40 minutes, which can be broken up into three 10-minute or two 15-minute sessions. She also recommends strength training and stress-management.

“Unless you have severe heart and breathing problems, and you can’t stress your heart at all – and that’s extreme cases – everyone can exercise,” she said. “You just have to do it to your ability.”