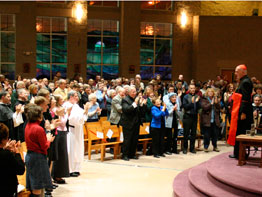 COLUMBIA, Mo. – Good evangelizers are good communicators, so Catholics must make the most of the tools available to them for sharing the good news of Jesus Christ, U.S. Cardinal John P. Foley told an audience in Columbia.

The cardinal, who served as president of the Pontifical Council for Social Communications at the Vatican for 23 years, gave an address Feb. 1 at St. Thomas More Newman Center on the campus of the University of Missouri.

Cardinal Foley, who is now head of the Knights of the Holy Sepulcher, noted that, on a recent trip to the Holy Land, he thought about how many good stories there are “among the people who are the descendents of those original followers of Christ.”

About 60 Catholic schools in Israel, Palestine, Jordan and Cypress serve about 20,000 students, about 30 percent of whom are Muslim. “The survival of those schools means that there is a dialogue going on for peace, toleration and understanding,” he said.

Further, Catholic-run Bethlehem University helps form many of the leaders in Palestine, both Christian and Muslim. “And part of that formation is a formation for peace and unity, tolerance and dialogue,” he said.

But few people outside the Holy Land know about these schools. In fact, most people throughout the world aren’t aware of the tremendous amount of good work Catholics do for the glory of God, said Cardinal Foley.

He noted that the worldwide Catholic Church is the largest private relief organization and the largest single private provider of educational services and hospital services.

“We have these treasures not only of faith but also of service, of dedication, of generosity,” he said. “We must make them better known.”

Although Christ did tell his followers, “Let your good deeds be done in secret, so that even your right hand does not know what your left hand is doing,” Cardinal Foley noted that Christ also said, “Let your light shine for all people, so they may see your good works and give glory to your heavenly Father.”

“I like that last one more,” said Cardinal Foley. “We should let our light shine, not for our own glory but for the greater glory of God!”

That goes for individuals and the church as a whole, he said.

The cardinal emphasized the importance of public relations in the church. He said when church officials are open and in close contact with people in the media, the underreported stories about the church get a better chance of seeing the light.

But that can only happen when Catholics earn the media’s trust, he said. “Be completely truthful in regard to all questions that are asked,” he advised. “Thank God, most of the time, we provide good news. But if there’s bad news, we have to be honest about it.”

Several years ago, when asked what the church’s answer should be to scandalous allegations of sexual abuse by priests, Cardinal Foley answered: “Virtue. And in the absence of virtue, candor, which is itself a virtue.”

“The terrible scandals should move us all to acts of reparation and greater personal holiness,” he said, “and we shouldn’t forget – we must never forget – the wonderful good that is done in the church throughout the world: not only in proclaiming the Gospel, but in the service of the sick, the elderly, the ignorant, the poor.”

Cardinal Foley said his years in charge of coordinating the Vatican’s communications and media operations were easier thanks to the presence of Pope John Paul II and then Pope Benedict XVI.

Therefore, when the producers of NBC’s “Today” show wanted to do a week of programs from St. Peter’s Square, he worked to help them get permission. “I figured that only good can come out of it,” he said. “The same was true with CBS doing a ‘48 Hours’ program inside the Vatican. That worked very well.”