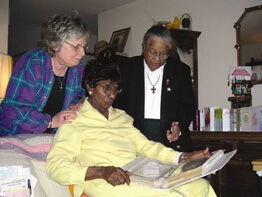 When St. Matthew, Northwood, parishioner Dorothy E. Alford is in need of a spiritual boost or a friend, this 95-year-old Idlewood resident contacts her ‘godparents.’

She is not praying to deceased family or friends who attended her baptism – but calling the two younger women who assisted in her conversion to Catholicism three years ago.

Rosalie Douglas, 81, of Ramblewood and Connie Fliegel, 55, of Towson have become two of the most important people in Ms. Alford’s life.

A Southern Baptist most of her life, Ms. Alford joined the Friendship Club at St. Matthew’s several years ago in an effort to meet others in the community who were 65 and older.

About four years ago she approached Ms. Douglas – who ran the Rite of Christian Initiation for Adults (RCIA) program – to inquire about converting to Catholicism, even though she was already in her 90s.

“I had relatives who were Catholic, and after I became involved in the Friendship Club I felt such a strong connection to the people in this parish and the religion,” she said. “I wanted to be part of this community in all aspects.”

Recognizing Ms. Alford’s conviction to convert, Ms. Douglas enlisted Ms. Fliegel – who became a Catholic in the early 1990s – to sponsor her through the rigorous year-long process.

“I’ve known Connie for several years, and I just felt like this was going to be a good match,” Ms. Douglas said.

“There was an instant bond,” Ms. Fliegel said about the woman she sponsored. “Dorothy has qualities that reminded me of my late grandmother, who was a very important person in my life.”

During the course of the next year, the three women developed a stronger bond as Ms. Alford studied and prayed her way toward conversion.

Although Ms. Fliegel – who was baptized a Methodist – was Ms. Alford’s sponsor, she felt she also grew in the process.

“I was teaching her, but I felt like she was teaching me how to be a more caring and loving person,” Ms. Fliegel said. “In the process, it strengthened my faith and showed me how to really give of myself.”

The only cradle Catholic of the three women, Ms. Douglas – who had been a sister in the Sisters of the Holy Family in New Orleans for 23 years before leaving the order in the 1970s to care for her father – said her association with both of these women through RCIA is a reminder to her each day of how the Lord brings people together to enrich each other’s lives.

“Knowing these women has been an inspiration. While I was teaching them lessons in religion, they were teaching me lessons in life,” she said.

Ms. Alford said her guardian angels have taken her on a spiritual journey that has enriched her physically and emotionally.

“Instead of getting older, I feel like I’m getting younger,” she said. “That’s a nice feeling when you are my age.”