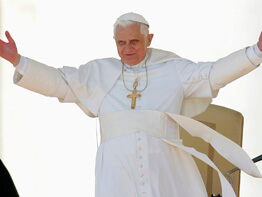 VATICAN CITY – The world’s wealth and resources do not belong to a select few, they also belong to the poor, Pope Benedict XVI said as he urged people to aid the needy and protect the environment.
“Christ is present even in the poor so they must never be insulted,” abused or deemed worthless, the pope said, citing the teachings of St. Gregory of Nyssa at his Sept. 5 weekly general audience.
Christ has made himself present in the poor so that even the “hard-hearted” may be moved to compassion and lend them a hand, he said on Blessed Mother Teresa of Calcutta’s feast day and the 10th anniversary of her death.
During the audience in St. Peter’s Square, the pope invited everyone, including “the whole church to always faithfully serve God in the poorest and neediest.”
He said Mother Teresa was an “authentic disciple of Christ,” and he urged members of the Missionaries of Charity, the order she founded, to “continue to follow her example and be instruments of divine mercy everywhere.”
Pope Benedict returned briefly to the Vatican from his papal summer villa south of Rome for the weekly audience and continued a talk he began Aug. 29 about St. Gregory, the fourth-century bishop and doctor of the church.
As a cool breeze swept the square, the pope apologized to the some 16,000 pilgrims gathered there for having a hoarse voice.
He said St. Gregory showed the different ways humanity could get closer to God, through prayer, “purification of the heart,” and love for others.
“Love for one’s neighbor is the true path up to the Lord because love is the stairway that leads to God,” he said.
Humanity is called to model itself after God, he said, adding that according to St. Gregory, becoming similar to God means “‘becoming just, holy, good.’”
A person who is a Christian carries a “great responsibility,” he said, because by carrying the name of Christ, one “therefore, must become like him.”
St. Gregory urges people to recognize they are all dependant on God, the pope said.
“‘Don’t think that everything is yours. A part must also be for the poor, God’s friends,’” he said, citing the words of St. Gregory.
“‘The truth, in fact, is that everything comes from God, the universal father, and that we are all brothers and sisters and we belong to the same (human) race,’” the pope said, quoting St. Gregory.
In an appeal at the end of the audience, Pope Benedict said the environment and the earth’s resources also are a part of this vast web of interdependence and as such demand the same care and respect.
“Care of water resources and attention to climate change are matters of grave importance for the entire human family,” he said.
The pope sent his greetings to those set to attend an international symposium on religion, science and the environment, including one of the symposium’s sponsors, Ecumenical Orthodox Patriarch Bartholomew of Constantinople, who will open the Sept. 6-12 meeting in Greenland.
The pope gave his support for the goals of the gathering which was to bring religious leaders from numerous traditions together to focus on the impact pollution and climate change have had on Greenland’s rapidly melting glaciers.
Praising the “growing recognition of the need to preserve the environment,” the pope called on everyone to pray and work “for greater respect for the wonders of God’s creation.”
Present at the Sept. 5 audience was a group of rabbis and U.S. bishops who presented Pope Benedict with an award for his contribution to Jewish-Catholic relations.
Rabbi Eugene Korn of the Center for Christian-Jewish Understanding at Sacred Heart University in Fairfield, Conn., and the university’s president, Anthony Cernera, presented the pope with their “Nostra Aetate” award at the end of the general audience.
The pope accepted the award and greeted members of the group which had been part of a tour to Oswiecim, Poland, and Rome to promote Christian-Jewish understanding.