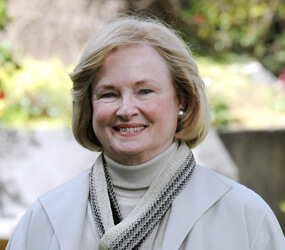 NOTRE DAME, Ind. – Mary Ann Glendon, a professor at Harvard Law School who recently stepped down as U.S. ambassador to the Vatican, will receive the University of Notre Dame’s Laetare Medal at commencement ceremonies May 17.

Established in 1883, the Laetare Medal is described as the oldest and most prestigious honor given to American Catholics. It is awarded annually to a Catholic “whose genius has ennobled the arts and sciences, illustrated the ideals of the church and enriched the heritage of humanity.”

Announcing the award recipient March 22, Holy Cross Father John I. Jenkins said Glendon “has impressively served our church and our country,” as both a “public intellectual” and a diplomat.

“She is an articulate and compelling expositor of Catholic social teaching who exemplifies our university’s most cherished values and deserves its highest praise,” Father Jenkins added in a statement.

During the commencement ceremony at which Ms. Glendon will receive the award, U.S. President Barack Obama is scheduled to speak and receive an honorary doctor of laws degree.

The March 20 announcement of his participation, however, drew immediate protest from some Catholics who said the president’s support for keeping abortion legal and expanding federal funding of embryonic stem-cell research should make him ineligible for Notre Dame honors.

Ms. Glendon, an expert in the fields of human rights, comparative law, constitutional law and legal theory, recently returned to Harvard Law School after stepping down as U.S. ambassador to the Holy See in January.

She is on a six-month research leave from her post as Learned Hand professor of law at Harvard to complete work on a book, “The Forum and the Tower,” about simultaneous practitioners of philosophy and politics.

“I’ve long been fascinated by how persons like Plato, Cicero, Tocqueville, Burke, Weber and others dealt with the push and pull between those two worlds,” Ms. Glendon said recently. “Now, after having spent some time in the forum myself, I’m looking forward to getting back to the ivory tower and finishing the project.”

Before joining the faculty at Harvard, Ms. Glendon taught from 1968 to 1986 at Boston College. She also has been a visiting professor at her alma mater, the University of Chicago, and at the Pontifical Gregorian University in Rome.

At the Vatican, Ms. Glendon has served since 1994 in the Pontifical Academy of Social Sciences. Appointed as president of the academy by Pope John Paul II in 2004, she resigned that post when she became an ambassador but continues as a member.

She also headed the 22-member Vatican delegation to the United Nations’ conference on women in Beijing in 1995.

In response to the announcement that President Obama will address Notre Dame’s graduates and receive an honorary degree, a petition drive initiated by the Cardinal Newman Society called it “an outrage and a scandal” for the university to honor him and asked Father Jenkins to “halt this travesty immediately.”

“This nation has many thousands of accomplished leaders in the Catholic Church, in business, in law, in education, in politics, in medicine, in social services and in many other fields who would be far more appropriate choices to receive such an honor,” the petition says.

At 11 a.m. EDT March 23, the Web site www.notredamescandal.com reported having received more than 18,888 signatures on the petition. The university’s communications office said it had no comment.

President Obama would be the ninth U.S. president to receive an honorary degree from Notre Dame and the sixth to be a commencement speaker. In 2001, President George W. Bush addressed the graduating class about the importance of faith-based organizations.