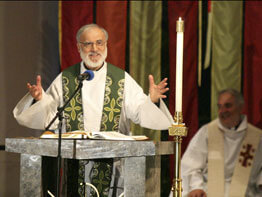 VATICAN CITY – Giving in to lust hurts both the individual and other people, the preacher of the papal household told Pope Benedict XVI and top Vatican officials.

Offering an Advent meditation Dec. 7, Capuchin Father Raniero Cantalamessa said often those who justify their life of impurity say “it is not hurting other people, it does not infringe on the rights and freedoms of others unless it entails carnal violence.”

But such reasoning is wrong, he said, because carnal sin not only violates God’s fundamental laws governing his creatures, but it threatens everyone.

Father Cantalamessa used an example from a Jewish holy book to illustrate how even one individual’s personal sin affects the entire community.

Quoting the Talmud, he said: “A number of people are sitting in a small boat. One man begins to drill a hole under his seat. The other passengers ask him, ‘What are you doing?’ He retorts, ‘What does it matter to you? I’m drilling the hole under my own seat.’ But they reply, ‘Yes, but the water will come in and drown us all.’

“This is what is happening in our society,” the papal preacher said. Even the church understands the kind of damage an individual’s personal mistakes can inflict on the entire community, he added.

The evil of lust lies in the fact that reason is made subordinate to instinct instead of the other way around, he said.

If instinct rules, then “it becomes an enemy, not an ally, of love,” and it can lead to savage crimes, Father Cantalamessa said.

Once upon a time, social mores were too one-sided and placed so much emphasis on avoiding carnal sin that they created, in some instances, “real and true neuroses,” he said.

Just being able “to say no” ignored more constructive Christian duties such as helping others, he said.

Now the pendulum has swung too far the other way, he said, noting that some people think as long as they perform good works for others their personal sins do not matter.

But, the papal preacher said, “The belief one can mix offering authentic service to others and the church with a messy personal life” that is straining to fulfill personal desires “is an illusion.”

What ends up happening, he said, is the person will exploit others “like he exploits his own body and the opposite sex.”