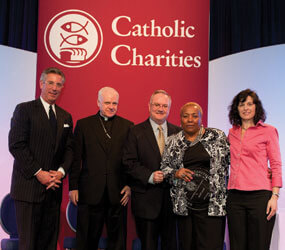 From answering the phones to gracing the children’s play area, School Sister of Notre Dame Margaret Marie Giblin does a little bit of everything at the Esperanza Center – all while in her 80s.

For 20 years, Bernice Thomas has gone to remarkable lengths as a foster care parent, including making plans to bring a child in the care of another home, who happens to be the sibling of one of her charges, on their next summer vacation.

Twice a month since the late 1990s, eight to 10 members of the sophomore class at Calvert Hall College High School have expanded their circle to include time working and playing with adults who are developmentally disabled at Gallagher Services.

Those three examples of “Cherishing the Divine Within” were recognized April 5 at the Hilton Baltimore, during An Evening with Catholic Charities of Baltimore.

“They’re an inspiring witness as to what Catholic Charities is all about,” Archbishop Edwin F. O’Brien said, after hearing testimonials to their litany of service.

Sister Margaret Marie, who spent 27 years working and living in Bolivia, has been a strong asset the last 16 months at the Esperanza Center, which provides services to new immigrants to Baltimore. Fluent in Spanish, “Sister Marg” provides clients with a friendly first impression.

She evoked Servant of God Dorothy Day, the founder of the Catholic Worker movement.

“I try to follow the advice of Dorothy Day,” Sister Margaret Marie said. “Find something useful to do, do it well, and try not to infuriate the rest of the workers.”

In words sure to resonate with the thousands who volunteer with Catholic Charities, she alluded to the goodwill and relationships she derives from her time at the Esperanza Center.

As a licensed Treatment Foster Care Parent for Catholic Charities’ Center for Family Services, Thomas has given a home and good memories to seven children who found themselves in need.

“I’m getting an award for something I like to do, and something I feel I should do,” she said. “A child should have good memories.”

Thomas takes her children to amusement parks, movies and restaurants, in addition to accompanying them to therapy and support groups.

The young men from Calvert Hall earned the Anne Lindsey Otenasek Youth Service Award, given in honor of a volunteer at Gallagher Services who was among the victims of terrorism that took down PanAm Flight 103 in 1988, also known as the Lockerbie bombing.

Guided by Meaghan Tracy, Calvert Hall’s service coordinator, the students assist men and women who are developmentally disabled in a Medical Day Program and the Gallagher Day Programs. They stand alongside clients, whether it be potting plants, assisting in occupational therapy or playing touch football.

“I was at the Gallagher Center today,” sophomore class president Joe Steffen said, “and I can attest it enriched my life.”