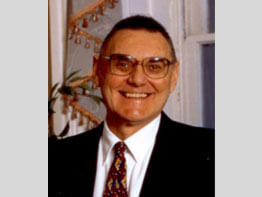 In the athletic history of Calvert Hall College High School, Gerard McCarron was a standard-bearer.

A Maryland Scholastic Association all-star first baseman in baseball and soccer goalie during his senior year at the Towson school in 1953, McCarron later returned to take over coaching duties of the baseball team from his father.

“He really was outstanding,” Brother John Herron, F.S.C., said of the younger Mr. McCarron, who died May 31 of multiple myeloma at the age of 72.

Despite being drafted by the Cleveland Indians, Mr. McCarron chose to attend Loyola College in Maryland and play both baseball and soccer.

There was never a hint of regret about not playing professional baseball.

“Absolutely, not,” said Sister Patricia McCarron, S.S.N.D., one of his three daughters and headmistress of Notre Dame Preparatory School in Towson. “He met my mother and had us. We are a very, very close family.”

Brother John remembered his longtime friend as a man who loved to instruct. Mr. McCarron was an American history teacher at Calvert Hall from 1957 to 1962 before moving on to Edmondson High School in Baltimore. He then served as assistant principal of Walbrook, Frederick Douglass and Northern high schools until he retired in 1994.

“I think they saw how serious he was and how prepared he was,” Brother John said.
“I think it was a treat for them to be in his classes.”

“He had a keen interest in the welfare of his students,” Brother John said. “I’m sure he held a special place in his heart for each and every student he had under his care.”

Despite having graduated more than a half-century ago, the elder Mr. McCarron remained at the forefront of Calvert Hall’s collective consciousness. In 2004, he was awarded the school’s first ever St. John Baptist de La Salle Award, given to an alumnus who displays leadership, faith and service.

Sister Patricia said her father and mother had a marriage that was a “tremendous partnership and they were spiritual companions.”

“In his life,” Sister Patricia said, “we saw the face of God each day.”