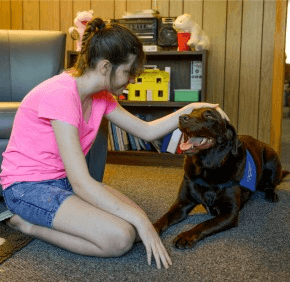 By Lisa Harlow
Special to the Review
The outpatient mental health clinic on the grounds of St. Rita Parish in Dundalk is a bustling facility, with a staff of six therapists, two social skills counselors, two intake coordinators – and one chocolate Labrador retriever.
Ben, the six-year-old therapy dog, belongs to Suzie Templeton, a child psychologist and licensed clinical social worker who has been with Catholic Charities of Baltimore for 24 years. Templeton says, hands down, the question she gets asked the most is: “Is Ben here today?”
“We (she and her husband, Chris) raised him not intending for him to be a therapy dog, but it just kind of worked out that way,” Templeton said. “We knew how gentle Ben is and how good he is with kids.”
She got the idea to include Ben in her therapy sessions after talking with staff from Villa Maria of Mountain Maryland in Cumberland, which also has a therapy dog “on staff.”
“We have some children,” Templeton said, “going through really tough situations – depression, anxiety, trauma. Ben is a source of comfort for them. He can help with transitions and he knows when clients need him.”
The charming chocolate Lab, who has been a fixture since May 2014, roams the clinic three or four days a month, welcoming clients and visiting staff in their offices. Often, clients will play fetch with Ben or simply spend time petting him.

Ben, a certified therapy dog, and his owner, Clinical Social Worker Suzie Templeton, greet a young client at the Catholic Charities Child and Family Services office in Dundalk Sept. 14. Located on the campus of St. Rita’s Church, Suzie and Ben counsel families dealing with anger and emotional problems. According to Suzie, Ben brings a calming effect to her clients, which allows them to communicate more openly about their challenges. (Kevin J. Parks | CR Staff)

Templeton recalls an extremely upset boy who would not leave his grandmother’s side in the waiting room and go to therapy.
“I came out and asked if Ben could help him go,” she said. “The boy said yes, gave his grandma a hug, and then walked into therapy with Ben and his therapist. Everyone sat on the floor as the boy just petted Ben.”
After five minutes, Templeton said, Ben made a noise. She asked the boy if he was OK. He replied that he was fine and that Ben could leave.
“Ben just knew what the boy needed,” Templeton said. “It was a pretty incredible experience.”
Another client, 13-year-old Emily Schildt, who has autism and other issues, has been going to the clinic for a little more than a year.
”Emily loves it when she goes to therapy and Ben is there,” said Dee Schildt, Emily’s mother. “It doesn’t matter what kind of day she’s had. He immediately gravitates to her. If she is upset or anxious, he just knows. He is a very big component of her therapy.
“Ben has been very instrumental in helping Emily open up and feel comfortable with her therapy. Spending time with Ben soothes her. Sometimes she just needs a friend, and he is there. They usually play ball before and after appointments.”
The four-legged staffer is not only there for clients.
“Ben is shared among everyone,” Schildt said. “He is a very special dog. Even if you don’t think you need it, he makes everyone feel good. His nickname should be ‘Gentle Ben.’ His presence is comfortable and welcoming.”
“Ben has brought joy and laughter to the clinic on the days he is here,” Templeton said. “It gives everyone a little brightness as they deal with the overwhelming struggles of mental illness.”
On a side note, it’s not all work and no play for Ben the therapy dog. According to Templeton, on his days off, Ben likes to swim in Middle River, play fetch, and hang out with his friends – both canine and human.
See also:
Putting students first earns Blue Ribbon for St. Joseph School in Fullerton
Family feel, modern tools lift OLPH School in Ellicott City to national Blue Ribbon honor
PrevNext