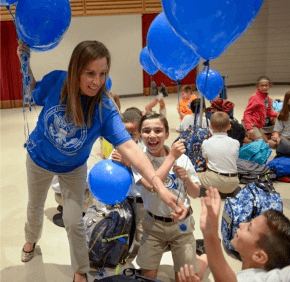 By Erik Zygmont
ezygmont@CatholicReview.org
Twitter @ReviewErik
FULLERTON – With the students’ happy shrieking, copious blue balloons and Kool and the Gang’s “Celebration” playing on a loop, it was clear that something was going on at St. Joseph School.
“Does anybody know why we’re here?” Ken Pipkin asked the students at the raucous assembly just prior to dismissal Sept. 28.
“We have a Blue Ribbon award,” a little girl answered.
So far, so good.
“What does that mean?” the principal pressed.
An eager young boy shot up his hand reflexively.
“It means … I don’t know,” he said.
From the back, another student helped him out.
“It means,” she said, “we’re one of the best schools in the country.”
Established in 1982 by then-Secretary of Education Terrell H. Bell, the National Blue Ribbon Schools Program recognizes public and private elementary, middle and high schools that demonstrate either superior academics or dramatic gains in student achievement.
The student was correct; being named a National Blue Ribbon School of Excellence is the highest honor a school can receive from the U.S. government.
“It’s just a great honor for the school, for all the hard work that’s been done over the years,” said Pipkin, who became principal this year.

Enhancing a student’s ability to learn through the use of technology is one of many reasons St. Joseph School in Fullerton received the 2016 National Blue Ribbon School of Excellence Award. (Kevin Parks | CR Staff)

At the assembly, he acknowledged the work of the previous principal, Phyllis Karko, and the former assistant principal, Rose Michaud, both of whom were at the helm for the 2015-16 schoolyear.
He also thanked Baltimore Archdiocese chancellor for education James B. Sellinger, who was present for the assembly and, Pipkin said, “a huge critical part of why we’re here today.”
The kids’ shrieks were loudest of all when Pipkin called out their teachers, who had donned blue T-shirts for the occasion.
Doug Ripley, who is in his second year teaching language arts at St. Joseph and his 26th year teaching for the archdiocese, gave credit right back to the kids.
“A lot of the students here are very much geared toward success and going on to good high schools,” he said.
A parishioner of St. Pius X in Rodgers Forge, he mentioned another aspect of St. Joseph.
“There’s a strong presence here in Jesus, in the way we act and what we say,” he said. “That’s from the kids all the way up to the faculty and administration.”

Pipkin believes St. Joseph’s success is a result of its individualized approach to students, with the faculty meeting regularly in order to “literally getting into the nitty-gritty of each individual student and figuring out exactly where they need support for growth.”
While he called the Blue Ribbon designation a “great honor for the school and for all the hard work that’s been done,” he noted that such work was undertaken firstly for the students.
“It was really done, as a Catholic school, with the child’s best interest at heart,” he said. “It just happened that that coincided with the Blue Ribbon standard.”
“The faculty and staff have taken the initiative to know each and every student,” said Brandon Hermosa, an eighth-grader who has been at the pre-kindergarten-to-grade-8 school for 10 years. “We’re not just numbers on a paper to them.”
“I like the environment here and the opportunities we get,” added fellow eighth-grader Clarisse Dapul. “We get to incorporate our faith into a lot of classes here.”
Parents, too, are part of the picture, according to Jeannette Boze, part of the St. Joseph “volunteer community,” which she called “very welcoming – and very organized.”
“I think a lot of people that give their volunteer time are very talented and have great skills to offer,” added Boze, who has a son in the second grade.
Fellow volunteer Darlene Rosenberger, mother of a first-grader, called the Blue Ribbon honor “exciting.”
“You feel proud to be a part of the school,” she said.
“It’s also a lot of hard work,” put in Doree Hudson, whose daughter, Mariana, is in the fourth grade. “I know what the teachers were doing last year to get here.”
She added that the school’s high standardized test scores – a key factor in the Blue Ribbon designation – were a reason she sent her daughter there.
“I feel St. Joseph will definitely help her for the future – for high school and college,” Hudson said. “I know others who have gone on from here and were definitely prepared.”
Father Joseph Langan, associate pastor of St. Joseph Parish, which shares a campus with the school, said the Blue Ribbon designation “just goes to show you not just the quality of education here at St. Joe’s, but the quality of Catholic education across the Archdiocese of Baltimore.”

Father Jesse Bolger, the pastor since July, acknowledged the work of his predecessor, Monsignor Kevin T. Schenning, now pastor of St. Margaret in Bel Air, as well as the faculty of St. Joseph.

“The teachers are the reason we got this award,” Father Bolger said. “Their commitment to excellence, to their faith and to the children have borne fruit.”